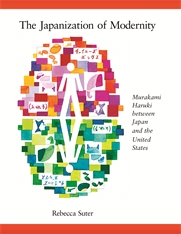 Murakami Haruki between Japan and the United States

Murakami Haruki is perhaps the best-known and most widely translated Japanese author of his generation. Despite Murakami’s critical and commercial success, particularly in the United States, his role as a mediator between Japanese and American literature and culture is seldom discussed.

Bringing a comparative perspective to the study of Murakami’s fiction, Rebecca Suter complicates our understanding of the author’s oeuvre and highlights his contributions not only as a popular writer but also as a cultural critic on both sides of the Pacific. Suter concentrates on Murakami’s short stories—less known in the West but equally worthy of critical attention—as sites of some of the author’s bolder experiments in manipulating literary (and everyday) language, honing cross-cultural allusions, and crafting metafictional techniques. This study scrutinizes Murakami’s fictional worlds and their extraliterary contexts through a range of discursive lenses: modernity and postmodernity, universalism and particularism, imperialism and nationalism, Orientalism and globalization.

By casting new light on the style and substance of Murakami’s prose, Suter situates the author and his works within the sphere of contemporary Japanese literature and finds him a prominent place within the broader sweep of the global literary scene.