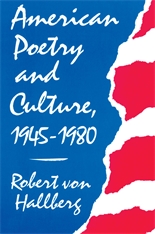 Challenging the common perception of poets as standing apart from the mainstream of American culture, Robert von Hallberg gives us a fresh and unpredictable assessment of the poetry that has come directly out of the American experience since 1945.

Who reads contemporary American poetry? More people than were reading new poetry in the 1920s, von Hallberg shows. How do poets respond to the public preoccupations of their readers? Often with fascination. Von Hallberg put the poems of Robert Creeley and John Ashbery together with the postwar outburst of systems analysis. The 1950s tourist poems of John Hollander, Adrienne Rich, W. S. Merwin, and James Merrill are treated as the cultural side of America’s postwar rise to global political power There are chapters on the political poems of the 1950s and 1960s, and on Robert Lowell’s sympathy for the imperialism of his liberal contemporaries. Poems of the 1970s on pop culture, especially Edward Dorn’s Slinger, and some from the suburbs of the 1980s, are shown to reflect a curious peace between the literary and the mass cultures.