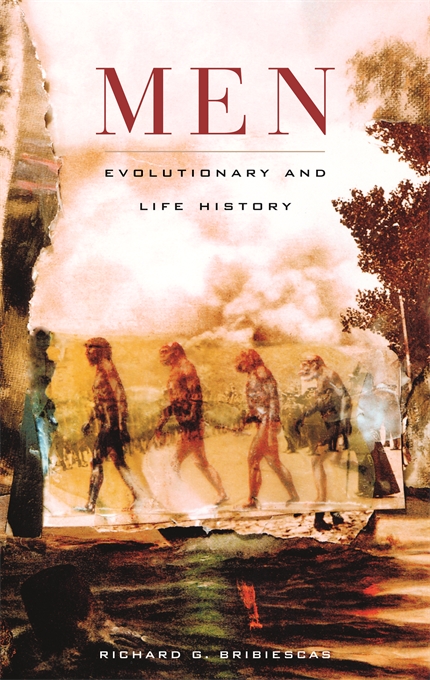 “Richard Bribiescas puts men under the microscope and discovers reasons for their dysfunctionality…as well as their success at accumulating social, economic, and political power. In Men, Bribiescas unravels maleness using traditional evolutionary theory alongside something called ‘life history theory’: an approach common in contemporary biology that seeks to understand the impact on human behavior of important life events such as growth and reproduction.”—Ludovic Hunter-Tilney, Financial Times

“This book aims to redress an imbalance: while in the age of feminism much insightful work has been done on women’s life history, we poor chaps have been rather overlooked. Essentially, the book asks: ‘What makes a man a man?’ And at its heart is an attempt to find out why males, who make up 50 per cent of the population, account for 85 per cent of violent crime. In this hunt, a substantial place is set aside for that lethal substance, testosterone. Yet Bribiescas also examines the huge problem faced by men but not women—that of parental certainty…Bribiescas writes in an intelligent and thoughtful manner. Although he is an eminent scholar in his discipline, biological anthropology, his book is easily digestible by any beginner. Yet it sets out to defend an original line of thought that will be keenly debated by anyone with an interest in the field.”—James Plumb, New Statesman

“Bribiescas successfully merges ideas and data from the fields of anthropology, archaeology, physiology, and evolutionary biology, and applies them to a subject that is rarely addressed explicitly: life history evolution (i.e., patterns of development, reproduction, and resource allocation) in human males… Bribiescas provides an insightful overview of this overlooked aspect of human biology.”—Brent Graves, American Journal of Human Biology

“The author is well positioned to write this book… His familiarity with the variable ways in which males lead their lives facilitates insightful views of comparative human population biology… Good signs that you enjoy a book include staying awake to finish reading it when you should be sleeping, and smiling while reading alone. In the case of Men, I stayed awake until 3:00 A.M. finishing it, while laughing out loud… Bribiescas’ fun, lively, and accessible prose makes for a successful trek into the male wilderness. Words like gonadotropin and catabolize may be new ideas (for some readers) falling from the trees, but you’ll see the forest here in refreshing ways.”—Peter B. Gray, Journal of Mammalian Evolution

“A text that demands to be closely read, with great fascination.”—Ray Olson, Booklist

“In this unique book, anthropologist Bribiescas looks at how and why men are different from women. No one disputes there are differences between the sexes, but seldom are the causes of those differences considered. Bribiescas compares human males to males of other species, looking for differences and similarities. Biological factors such as reproductive tendencies, hormones, fat, muscle, and aging are explored in conjunction with cultural and historical facts at play. The application of male physiology is probed as it relates to current male health issues like prostate cancer, development of a male contraceptive, and testosterone replacement therapy. The resulting book does not purport that biology can predict or explain everything about male behavior. What it does provide, however, are several interesting and provocative suggestions as to why men tend to engage in warfare and genocide and exert control over economics and politics throughout the world.”—Gloria Maxwell, Library Journal

“For anyone interested in the evolutionary and life history of human males, this may be just the book to have on one’s shelf. Yale anthropologist Bribiescas’s task is simple yet elegant: examine human males and determine how they differ behaviorally from both women and nonhuman males. Everyone knows there are physiological differences between men and women, but to what degree are the differences biologically related? Any modern answer to this seemingly perplexing (some would argue unanswerable) question is grounded in both evolutionary and life-history theory. Most readers will be familiar with the first, at least to some degree, but the second is newer and not as well known. Whereas evolutionary theory explains the origin and development of species through time, life-history theory explains the evolution of significant life events such as reproduction. It bypasses the simple, erroneous theorem that organisms attempt to maximize their longevity, substituting instead an emphasis on optimal lifetime reproductive success… Of great interest to lay readers with an interest in the age-old question of why men act the way they do.”—M. J. O’Brien, Choice