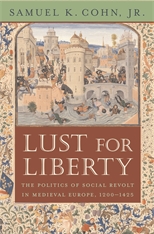 Lust for Liberty challenges long-standing views of popular medieval revolts. Comparing rebellions in northern and southern Europe over two centuries, Samuel Cohn analyzes their causes and forms, their leadership, the role of women, and the suppression or success of these revolts.

Popular revolts were remarkably common—not the last resort of desperate people. Leaders were largely workers, artisans, and peasants. Over 90 percent of the uprisings pitted ordinary people against the state and were fought over political rights—regarding citizenship, governmental offices, the barriers of ancient hierarchies—rather than rents, food prices, or working conditions. After the Black Death, the connection of the word “liberty” with revolts increased fivefold, and its meaning became more closely tied with notions of equality instead of privilege.

The book offers a new interpretation of the Black Death and the increase of and change in popular revolt from the mid-1350s to the early fifteenth century. Instead of structural explanations based on economic, demographic, and political models, this book turns to the actors themselves—peasants, artisans, and bourgeois—finding that the plagues wrought a new urgency for social and political change and a new self- and class-confidence in the efficacy of collective action.