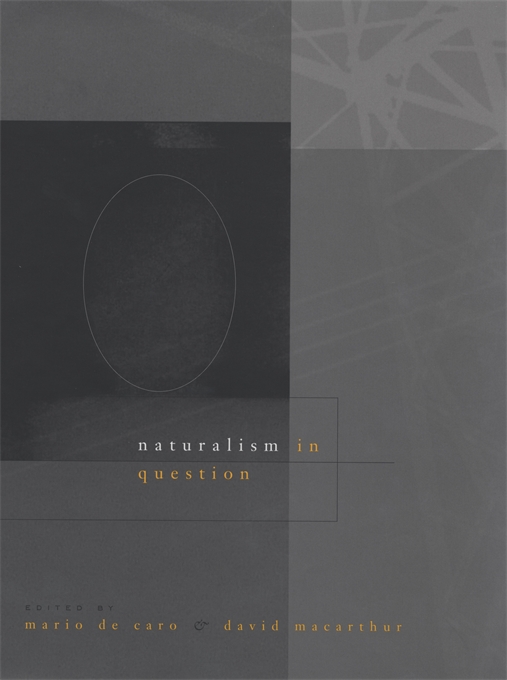 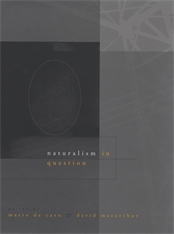 “De Caro and Macarthur’s edited collection Naturalism in Question is a timely contribution which questions the nature and status of naturalism and hints at alternative conceptions to the influential widespread ‘scientific’ form.”—Tim Thornton, History and Philosophy of Life Sciences

“It is a remarkably congenial collection of papers by a distinguished lineup of philosophers. There are two different types of argument to be found in these papers. The first shows how an uncritical adoption of this orthodox naturalist institution either misconstrues or underdetermines phenomena such as science itself, the mind, agency, ethics, and personal identity. On the second line, what is needed to avoid straying into the impasses of underdetermination (as the orthodox naturalist does) and dualism (as the normativist does) is a fresh and unbiased look at our conception of ‘nature,’ ‘the natural,’ ‘naturalism,’ and kindred concepts such as those of ‘dispositions,’ ‘causation,’ and ‘science’ …The result is a critical view of the explanans that is taken for granted by the orthodox naturalist, and used by the normativist as a foil for defining normative relations. Pursuing this line of argument is necessary if we want to avoid the shortcomings of both orthodox naturalist and normativist approaches to key phenomena in contemporary thinking. For anyone with such interests, and for anyone interested in the role of the concept of ‘nature’ and kindred concepts in their thinking, this collection will prove to be very instructive.”—Jacob Lindgaard, Philosophical Books

“De Caro and Macarthur’s ambitious collection Naturalism in Question is a call to arms for opponents of the set of related doctrines that constitute scientific naturalism. It includes critiques of these doctrines from such luminaries as Barry Stoud, Hilary Putnam, John McDowell, Donald Davidson, Jennifer Hornsby, and Stanley Cavell, among others. Scientific naturalism is, in a nutshell, the view that the physical sciences should be given pride of place in our ontological, epistemological, and semantic endeavors. Operationally, this involves requiring that the concepts, posits, and methodologies of disciplines outside the physical sciences be shown to be suitably related to scientific concepts, posits, and methodologies, or be judged suspect. And suitable relatedness to the physical sciences is more often than not taken to require some form of reducibility… Naturalism in Question contains a number of gems.”—Peter Alward, Philosophy in Review

“Naturalism in Question is undertaking an important task—to address the prevalence of scientific naturalism as the paradigm of serious philosophical work in contemporary Anglo-American philosophy. The fact that such eminent philosophers as Davidson, Cavell, McDowell, Stroud, and Putnam are brought together around a common issue is itself an attractive feature. It provides a certain landscape of contemporary American Philosophy that is most important to bring into view. It shows that despite all their obvious differences, such philosophers can be seen as sharing a similar concern to revive a form of philosophy that does not model its rigor on problematic pictures of scientific work.”—Eli Friedlander, author of Signs of Sense: Reading Wittgenstein’s Tractatus

“The book’s concern with how to position philosophy with respect to science and nature is absolutely central to contemporary philosophical discussion. The contributors are distinguished and talented philosophers, and their articles in this volume will sustain and reinforce their reputation for philosophical clarity and insight. The more expansive naturalisms they advocate are important, constructive, and often provocative responses to a growing recognition of the inadequacies of naturalist orthodoxy. The book thereby promises to be at the center of a renewed discussion of naturalism, which will likely push the entire field in new directions.”—Joseph Rouse, author of How Scientific Practices Matter: Reclaiming Philosophical Naturalism