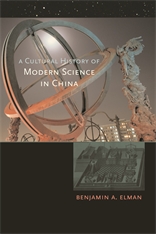 A Cultural History of Modern Science in China

“Elman shows that progress in Chinese science continued after 1600, as it absorbed new ideas from the West, and, for him, China’s nineteenth-century failure to respond adequately to Western incursions has been exaggerated… [A Cultural History of Modern Science in China] offer[s] a new and important perspective on Sino-European interaction.”—Delia Davin, The Times Literary Supplement

“Elman’s study is a tremendous achievement, both in its analytical insight and empirical depth.”—Thomas S. Mullaney, Science

“In this concise but comprehensive new book, Elman makes his masterful synthesis of the scholarship in the field—including his own—accessible to nonspecialists. A textbook treating modern Chinese science up to 1900, long awaited, has at last emerged.”—Danian Hu, Isis

“In this concise, accessible, but comprehensive book, Benjamin Elman describes the effects on science of the Jesuit mission in imperial China in 1600–1800, and the latter influence of Protestants in the nineteenth century. By doing so, he places the emergence of modern science in China in historical context.”—Nature