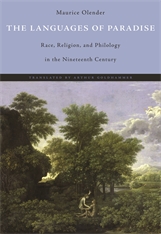 The Languages of Paradise

Race, Religion, and Philology in the Nineteenth Century

Michel Foucault observed that “the birth of philology attracted far less notice in the Western mind than did the birth of biology or political economy.” In this penetrating exploration of the origin of the discipline, Maurice Olender shows that philology left an indelible mark on Western visions of history and contributed directly to some of the most horrifying ideologies of the twentieth century.

The comparative study of languages was inspired by Renaissance debates over what language was spoken in the Garden of Eden. By the eighteenth century scholars were persuaded that European languages shared a common ancestor. With the adoption of positivist, “scientific” methods in the nineteenth century, the hunt for the language of Eden and the search for a European Ursprache diverged. Yet the desire to reconcile historical causality with divine purpose remained.

Because the Indo-European languages clearly had a separate line of descent from the biblical tongues, the practitioners of the new science of philology (many of whom had received their linguistic training from the Church) turned their scholarship to the task of justifying the ascendance of European Christianity to the principal role in Providential history. To accomplish this they invented a pair of concepts—Aryan and Semitic—that by the end of the century had embarked on ideological and political careers far outside philology. Supposed characteristics of the respective languages were assigned to the peoples who spoke them: thus the Semitic peoples (primarily the Jews) were, like their language, passive, static, and immobile, while the Aryans (principally Western Europeans) became the active, dynamic Chosen People of the future.

Olender traces the development of these concepts through the work of J. G. Herder, Ernest Renan, Friedrich Max Müller, Adolphe Pictet, Rudolph Grau, and Ignaz Goldziher. He shows that, despite their different approaches, each of these men struggled more or less purposefully “to join romanticism with positivism in an effort to preserve a common allegiance to the doctrines of Providence.”

With erudition and elegance, Olender restores the complexity and internal contradictions of their ideas and recreates the intellectual climate in which they flourished.