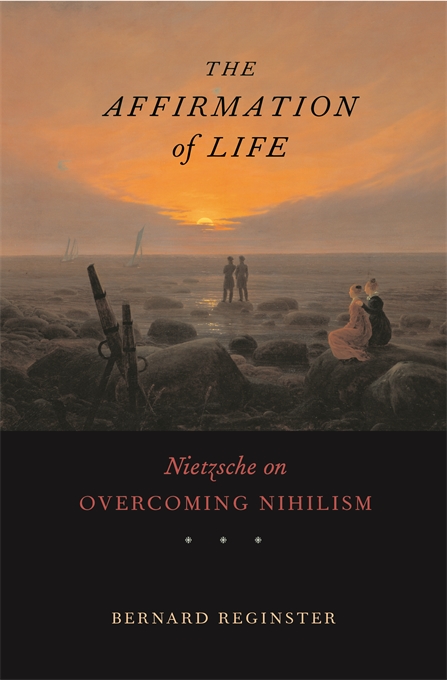 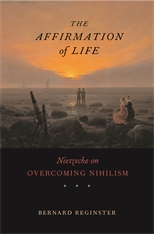 The Affirmation of Life

“A well written and thoughtful book… Impressive and provocative… The argumentation is clear, persuasive, and innovative… The discussion of existing interpretations (those of Clark, Kaufmann, Lowith, Nehamas, and several others) is exemplary: it is careful and tranquil, thoughtful and engaging.”—Nectarios G. Limnatis, Review of Metaphysics

“Through an analysis of his main philosophical ideas, like the will to power and eternal recurrence, Reginster presents the structure of Nietzsche’s affirmation of life, which is based on overcoming resistance and despair. With lucid writing and a superb examination of his works, Reginster succeeds in presenting a coherent interpretation of Nietzsche’s philosophy.”—Scott Duimstra, Library Journal

“For Reginster, Nietzsche’s central motivating problem is the problem of nihilism, a problem caused by the ‘death of God.’ His argument then dissects nihilism into two distinct problems: on the one hand, the problem of disorientation, the sense we have that our highest values lack metaphysical grounding or justification; and, on the other, the problem of despair, our sense that our highest values are unrealizable in this world. Reginster argues that the nihilism of disorientation has to be faced and answered before one can grapple with (or indeed be seized by) despair. It is only when we have restored to ourselves a sense of the worth of these values, by some successful answer to the problem of disorientation, that we can feel the full force of the problem of despair. The problem of disorientation, Reginster then argues, is successfully solved by Nietzsche through his doctrine of perspectivism, understood as the idea that all our reasons are contingent. Nietzsche argues that the existence of contingent perspectives is a necessary condition for any practical reasoning, and therefore cannot possibly spell the downfall of our aspirations to find reasons. Reginster then turns to the despair problem, showing the depth of Nietzsche’s engagement with Schopenhauer’s pessimism. Offering the most philosophically serious and interesting discussion of Schopenhauer I have seen in the literature, he then argues that the doctrine of the Will to Power is Nietzsche’s response. Instead of seeking satisfaction, Nietzsche argues, we basically seek the overcoming of resistance. If this is so, we ought to will the continued existence of suffering (understood as the effect of resistance to our will), so that we have struggles still to win.”—Martha C. Nussbaum, Ernst Freund Distinguished Service Professor of Law and Ethics, University of Chicago

“Heidegger suggested a half-century ago that the problem of nihilism and the doctrine of the will to power were central to Nietzsche’s philosophy, but only now, thanks to Reginster’s elegantly crafted study, do we have a penetrating and systematic philosophical exposition of these themes and their interrelation. A particularly welcome feature of this new study is the way in which it situates the Nietzschean doctrines against the background of Schopenhauer’s ideas and arguments; in so doing, it teaches the reader quite a lot about Schopenhauer and, in the process, sheds interesting new light on well-known ideas of Nietzsche’s.”—Brian Leiter, University of Texas at Austin

“Reginster focuses on a central aspect of Nietzsche’s thought—the threat of nihilism and the conditions under which life can be affirmed. Reginster is the first to reconstruct Nietzsche’s position on nihilism systematically, and his book will set the terms of the debate on this crucial issue for a long time. Reginster’s convincing case for the coherence and systematicity of Nietzsche’s thought goes against the grain of most contemporary interpretations, which see Nietzsche’s thought as radically (and intentionally) fragmented, contradictory, and hostile to rationality and traditional philosophy. Reginster’s most important contribution is his exposition of Nietzsche’s doctrine of the will to power, which he grounds in a thorough and philosophical reading of Schopenhauer. In sum—a great book!”—Frederick Neuhouser, Professor of Philosophy and Viola Manderfeld Professor of German, Barnard College