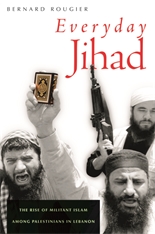 The Rise of Militant Islam among Palestinians in Lebanon

As southern Lebanon becomes the latest battleground for Islamist warriors, Everyday Jihad plunges us into the sprawling, heavily populated Palestinian refugee camp at Ain al-Helweh, which in the early 1990s became a site for militant Sunni Islamists. A place of refuge for Arabs hunted down in their countries of origin and a recruitment ground for young disenfranchised Palestinians, the camp—where sheikhs began actively recruiting for jihad—situated itself in the global geography of radical Islam.

With pioneering fieldwork, Bernard Rougier documents how Sunni fundamentalists, combining a literal interpretation of sacred texts with a militant interpretation of jihad, took root in this Palestinian milieu. By staying very close to the religious actors, their discourse, perceptions, and means of persuasion, Rougier helps us to understand how radical religious allegiances overcome traditional nationalist sentiment and how jihadist networks grab hold in communities marked by unemployment, poverty, and despair.

With the emergence of Hezbollah, the Shiite political party and guerrilla army, at the forefront of Lebanese and regional politics, relations with the Palestinians will be decisive. The Palestinian camps of Lebanon, whose disarmament is called for by the international community, constitute a contentious arena for a multitude of players: Syria and Iran, Hezbollah and the Palestinian Authority, and Bin Laden and the late Zarqawi. Witnessing everyday jihad in their midst offers readers a rare glimpse into a microcosm of the religious, sectarian, and secular struggles for the political identity of the Middle East today.