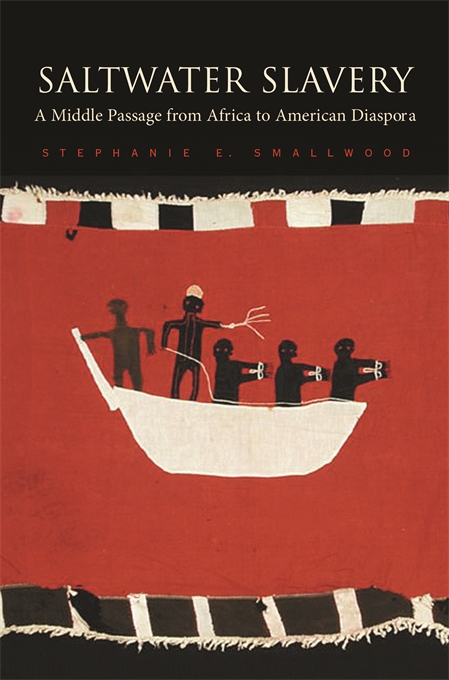 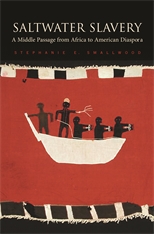 A Middle Passage from Africa to American Diaspora

“Stephanie E. Smallwood’s excellent book Saltwater Slavery has attracted less attention than it deserves. Making careful use of the primary sources at [the National Archives at] Kew, Smallwood follows 300,000 captives taken from what is now Ghana, between 1675 and 1725, to ‘widening circles of the diaspora in the Americas.’ …An ambitious, innovative and highly successful feature of her book is to take what is known about the beliefs of the isolated societies from which slaves were taken—communities who in some cases had never seen white people, the ocean or a ship—to offer a carefully controlled imaginative reconstruction of how the embarked slaves may have conceptualized the ‘saltwater’ experience and attempted to reconcile what they saw with their existing world view.”—William St. Clair, The Times Literary Supplement

“This deeply researched, tightly focused, and skillfully evocative look at the Atlantic slave trade, 1675–1725, details the experience of crossing the ocean—an ordeal fatal to many of the slaves who were forced to undertake it.”—The Atlantic

“Smallwood aims to move away from the numbers game that has ensnared so many other historians studying the Middle Passage. Instead of ledgers and account books, she uses letters, journals, and narratives from around the trade route to get closer to the slave experience itself. As the narrative follows the progress of the newly enslaved across the Middle Passage, Smallwood’s use of quotes brings to life the everyday horror experienced by ‘Saltwater Slaves,’ as Africans first arriving in the Americas were described at the time.”—Kathryn V. Stewart, Library Journal

“In this stark depiction of slaves and their ‘utter alienation from the most basic norms of everyday life,’ Smallwood simultaneously delivers a lucid popular history and expands scholarly understanding of slavery with a thorough, clear-eyed look at the dreaded Middle Passage and how it shaped the slave experience… Smallwood is particularly adept at portraying, in detail, the unbearable conditions of the slave ships… Extensive research, much of it from primary sources, forms Smallwood’s basis, but she has a storyteller’s knack for well-pitched anecdotes and pointed examples.”—Publishers Weekly

“Stephanie Smallwood’s Saltwater Slavery is the new starting point for studies of the Middle Passage and required reading for students of the black Atlantic.”—Ira Berlin, University of Maryland, author of Many Thousands Gone

“Stephanie Smallwood’s Saltwater Slavery sets a new standard. It is at once a harrowing evocation of the Middle Passage, a brilliant account of the ways that Africans and Europeans made sense of the bloody process in which they were joined, and a subtle critique of the categories of historical inquiry. Here we see realized the enormous promise of a genuinely Atlantic approach to the history of American slavery.”—Walter Johnson, author of Soul by Soul

“No study of the Atlantic slave trade has attempted to penetrate the darkness of those ships’ holds, to explore what might have gone on in the minds of the hundreds of nameless people trapped below decks—until now. Smallwood gets there through a tour de force of theoretical sophistication, sensitive informed imagination, and dramatic writing. Hers is the most original and provocative book on the Middle Passage in almost half a century.”—Joseph C. Miller, author of Way of Death: Merchant Capitalism and the Angolan Slave Trade 1730–1830

“W.E.B. Du Bois called the African slave trade the ‘most magnificent drama in the last thousand years of human history.’ Stephanie Smallwood captures this drama in imaginative and innovative ways, offering a powerful account of the maritime origins of African-America amid the profound violence of the world market.”—Marcus Rediker, co-author of The Many-Headed Hydra: Sailors, Slaves, Commoners and the Hidden History of the Revolutionary Atlantic