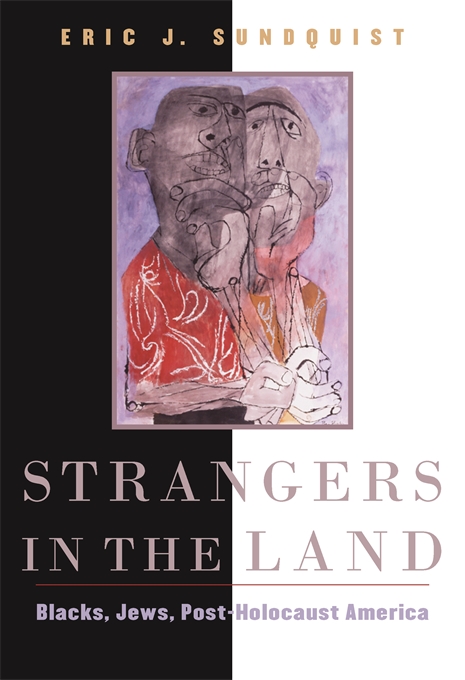 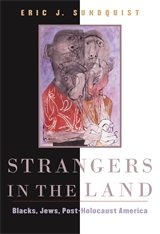 Strangers in the Land

“Eric J. Sundquist’s immense and serious book pays the closest attention ever given to the symbiosis and the alienation of Jews and African Americans in the aftermath of World War II, even as he traces the emergence of major works of Jewish and black literatures in this same period… Sundquist’s new book reveals not only how much of the literature we will remember from the last half of the twentieth century is literature of America’s strangers—blacks and Jews. He also reveals how the tragic alliance and the estrangement of these groups from each other emerged as late twentieth-century American literature’s most haunting obsession… This book is a moral argument for the high office, and the great risks, of literature… Despite its great richness, it would not be enough to call this book, as its jacket states, encyclopedic. Strangers in the Land is a much braver book than its compendiousness suggests. For the cumulative effect of Sundquist’s careful search for the most complete explanatory contexts, and of his judicious counterpoising of black and Jewish materials, is that an awful lot of evidence is in. And thus the possibility of, and the obligation to, clear-eyed judgment draws nigh. By the end of the book, and in particular by the last two chapters, Holocaust and Spooks, Sundquist has assembled nuanced criteria for the judgment of what ought to count for constructive, as opposed to obsessional, engagement; what does, and ought to, count for self-searching, as opposed to narcissistic, expression; what does, and what ought to, count for lastingly valuable, as opposed to compellingly, noticeable art.”—Elisa New, New Republic

“Sundquist’s study is exhaustive… This is the definitive literary study of a symbiotic and fraught ethnic relationship. Sundquist offers no apologies or easy answers, approaching his readings with careful precision; clear, lucid prose; astute judgment; and a rigorous historical understanding… Sundquist looks across ethnic lines to pick up the pieces of a fragmented ethnic dialogue. At a time when ethnic studies are often arbitrarily separated, Sundquist crosses the lines of Jewish studies, African American studies, and American studies to determine exactly who ‘we’ are.”—David Yaffe, Bookforum

“Eric Sundquist’s Strangers in the Land, an insightful, intuitive, and penetrating analysis of the intellectual and cultural life of black and Jewish Americans during the post-Holocaust years, attempts to broaden this specialty significantly further. The not specifically sequential discourse, at times uncomplicated, at others imperious, engages the standards of black–Jewish relations identity, liberalism, civil rights, racism, anti-Semitism but also contributes perceptive and astute examinations of other black and Jewish antagonisms utilizing the vista of literary narratives… The result is a descriptively written book that examines the intellectual worthiness of the black–Jewish question while enhancing the impressive literature on black–Jewish relations in America.”—Glen Anthony Harris, Canadian Journal of History

“Sundquist, a professor of literature at the University of California Los Angeles, constructs his elegant narrative on a spectacularly broad canvas, drawing on all manner of cultural artifacts—from Saul Bellow to Bob Marley. It is a delight to see how he brings this array of sources to bear on the ambitious task of making sense of a topic that perplexes simplistic explanation and understanding.”—Evan R. Goldstein, Jewish Quarterly

“Attention to relations between Jews and Blacks has produced an extensive body of academic and popular literature, and Eric Sundquist has added an elegant and instructive analysis—indeed, it may be one of the most insightful books yet to appear… This is an important book which holds the reader’s attention and which can easily be assigned to undergraduate and graduate courses in the social sciences and humanities and yet will be of equal interest to scholars who have followed the discourse on Jewish–Black relations in both the popular media and the academic arena.”—Katya Gibel Mevorach, Shofar

“Sundquist’s mammoth study is a deeply researched and illuminating hard look at how the often positive, often fraught relationship between American Jews and blacks has manifested itself in literature, historical writing, sociology and popular entertainment over the past 60 years. Sundquist’s wide-ranging erudition is evident on every page; he’s as apt at finding points of dialogue among Harlem Renaissance writings, popular sociology of the 1930s and the later fiction of Ralph Ellison, James Baldwin and Bruce Jay Friedman as he is at discussing ‘black responses to Nazism’ in the writings of Zora Neale Hurston.”—Publishers Weekly