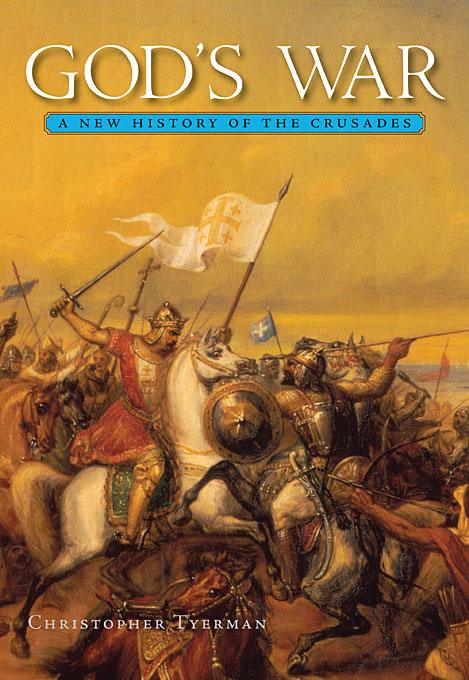 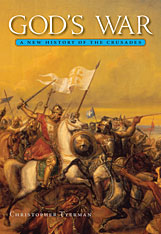 A New History of the Crusades

“Christopher Tyerman, who teaches medieval history in Oxford, offers in his new and massive study of the Crusades as a whole a welcome synthesis for the general reader… Full of fascinating detail… God’s War is a first-rate, scholarly, up-to-date, and highly readable survey of the entire crusading movement… In the gullible age of The Da Vinci Code, Tyerman offers a sane, informed, and gripping account of one of the most characteristic and most extraordinary manifestations of the Christian Middle Ages.”—Eamon Duffy, The New York Review of Books

“God’s War is a long but highly readable account of this extensive back-and-forth struggle. It is an impressive achievement, a work that manages to tie together an extraordinary number of threads across nearly half a millennium of European history. Although it can be taken as a response to Pope Benedict XVI’s comments at Regensburg, it is more properly read as an extended rejoinder to Steven Runciman’s classic three-volume History of the Crusades, published in the early 1950s, a long and colorful account that is nonetheless studded with judgments that now seem prejudiced and amateurish. Tyerman, by contrast, is never amateurish. His knowledge of the period is encyclopedic, and his judgments are sharp, astute, and fair—which is to say unsparing—to both camps. He neither vilifies Islam nor engages in the easy Euro-bashing that is the obverse of Islamophobia. With so many people succumbing to subjectivism these days, it is bracing to come across a historian who remains resolutely above the fray, who insists on viewing the conflict as a whole and who always has the broader context in mind.”—Daniel Lazare, The Nation

“Tyerman, an Oxford scholar, combines vigorous argument and nuanced analysis in this deeply learned chronicle of the Crusades… It’s the best single-volume treatment of this still-controversial and fraught subject.”—Benjamin Healy and Benjamin Schwarz, The Atlantic

“A magisterial work…it is a shoo-in to become this generation’s definitive history of the original Crusades, a series of military expeditions that temporarily returned the Holy Land to Christian rule in the Middle Ages. Hefty, encyclopedic and a darn good read, Tyerman’s book has the rarest of virtues among myriad treatments of the subject: It doesn’t bend history to preconceptions.”—Ron Grossman, The Chicago Tribune

“With rekindled controversy about Western invasions of the Middle East, the Crusades of the late Middle Ages take on unanticipated relevance. It is thus a real boon for this strikingly effective book to appear at this time. The key to Tyerman’s signal success is his ability to explain both the vicious brutality and the serious Christian altruism that were so intimately intertwined in the crusading experience and that have left such a tangled legacy for Muslim–Christian relations to this day.”—Mark A. Noll, The Christian Century

“Anyone who likes knights, castles and battles as much as I do will enjoy Christopher Tyerman’s masterpiece God’s War, a history of the Crusades written with great breadth, clarity and human sympathy: one of the achievements of the year.”—Dominic Sandbrook, The Daily Telegraph

“Christopher Tyerman’s God’s War: A New History of the Crusades is a doorstop of a book, a mammoth effort to retell, based on modern scholarship, the story of how Western Christendom made war to wrest the Holy Lands from Muslim hands. As we all know, this isn’t considered ancient history in the Middle East.”—Fritz Lanham, The Houston Chronicle

“Christopher Tyerman’s God’s War is comprehensive, fascinating, and timely. It deflates comparisons of current U.S. strategies with the Crusades. True, the participation of religious in battle (like Odo on the Bayeux Tapestry) is noteworthy, but so is Tyerman’s questioning of the cliché ‘Age of Faith.’ Indeed, while these books make the Middle Ages seem real, they also make it seem different, and our capacity to entertain the differences is morally crucial.”—Tom D’Evelyn, The Providence Journal

“God’s War is the new standard in the field… Adjectives for [it] almost fail. ‘Comprehensive,’ ‘monumental,’ and ‘epic’ come to mind, and they are appropriate but scarcely adequate. In brief, this is a work by a master historian.”—Alfred J. Andrea, CT Review

“This thick book compares favorably to Sir Steven Runciman’s three-volume A History of the Crusades (1951–54), but where Runciman, writing a half century ago, saw the Crusades as Christianity’s moral failure, Tyerman sees a violent era: neither Christians nor Moslems were peaceful, and both faced dangerous enemies… In addition to persuasive revisionist interpretations of individual crusades, Tyerman treats the broader scope of crusading, including Spain, the Balkans, and the Baltic. Most importantly for historians, the author sees nothing in the Crusades than can inform modern politics.”—W. L. Urban, Choice

“Challenging traditional conceptions of the Crusades, e.g., the failure to retain Jerusalem, Tyerman believes that it was the weakening of papal power and the rise of secular governments in Europe that finally doomed the crusading impulse. This is a marvelously conceived, written, and supported book.”—Robert J. Andrews, Library Journal

“This is likely to replace Steven Runciman’s 50-year-old History of the Crusades as the standard work. Tyerman, lecturer in medieval history at Oxford University, demolishes our simplistic misconceptions about that series of ferocious campaigns in the Middle East, Muslim Spain and the pagan Baltic between 1096 and 1500… God’s War is that very rare thing: a readable and vivid history written with the support of a formidable scholarly background, and it deserves to reach a wide audience.”—Publishers Weekly (starred review)

“This is a magisterial work. In God’s War, the Crusades are not just emblematic episodes in a troubled history of Europe’s encounter with Islam. Tyerman shows that they are, with all their contradictions—tragedy and tomfoolery, idealism and cynicism, piety and savagery—fundamentally and inescapably human.”—Paul M. Cobb, Associate Professor of Islamic History, Fellow of the Medieval Institute, University of Notre Dame

“Christopher Tyerman has crafted a superb book whose majestic architecture compares with Runciman’s classic study of the Crusades… He is an entertaining as well as reliable guide to the bizarre centuries-long episode in which Western Christianity willfully ignored its Master’s principles of love and forgiveness.”—Diarmaid MacCulloch, author of Thomas Cranmer: A Life

“Tyerman’s wonderful book is contemporary medieval history-writing at the top of its game. It is also the finest history of the Crusades that anyone has ever written, fully informed by its predecessors and by the excellent scholarship of the past half century. Trenchantly written on the grand scale and full of vivid detail, clear argument, and sharp judgment, God’s War shows how the entire apparatus of crusade became tightly woven into European institutional and social life and consciousness, offering a highly original perspective on all of early European history and on European relations with non-Europeans. It shows no patience with ignorant mythologizing, modern condescension, or cultural instrumentalism. In short, it constitutes a crusade history for the twenty-first century—and just in time.”—Edward M. Peters, Henry Charles Lea Professor of History, University of Pennsylvania

“At a time when interest in the Middle East and the Crusades has reached a new height, Christopher Tyerman has made a significant contribution to the ever-growing shelves of books devoted to this subject. Tyerman’s well-written book focuses heavily on the development of ideas about holy war from antiquity onward and on the crusade to the East from the eleventh to the sixteenth century. It is based on a careful reading of both primary and secondary sources and will prove an important resource for a broad audience of scholars, students, and general readers. The comparison with Runciman’s history leaps out from the pages of this large volume and the temptation to address it will no doubt seduce others, but this volume is Tyerman through and through.”—James M. Powell, Professor Emeritus of Medieval History, Syracuse University