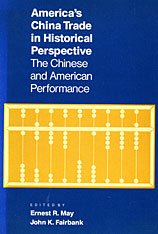 The Chinese and American Performance

This volume explores commercial relations between the United States and China from the eighteenth century until 1949, fleshing out with facts the romantic and shadowy image of “the China trade.” These nine chapters by specialists in the field have developed from papers they presented at a conference supported by the national Committee on American–East Asian Relations.

The work begins with an Introduction by John King Fairbank, then moves on to analysis of the old China trade up to the American Civil War, centering on traditional Chinese exports of tea and silk. A second section deals with American imports into China—cotton textiles and textile-related goods, cigarettes, kerosene. Finally, the impact of the trade on both countries is assessed and the operations of American-owned and multinational companies in China are examined. For both the United States and China, the economic importance of the trade proves to have been less than the legend might suggest.