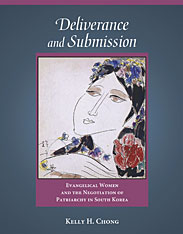 Evangelical Women and the Negotiation of Patriarchy in South Korea

South Korea is home to one of the most vibrant evangelical Protestant communities in the world. This book investigates the meanings of—and the reasons behind—an intriguing aspect of contemporary South Korean evangelicalism: the intense involvement of middle-class women. Drawing upon extensive ethnographic fieldwork in Seoul that explores the relevance of gender and women’s experiences to Korean evangelicalism, Kelly H. Chong not only helps provide a clearer picture of the evangelical movement’s success in South Korea, but interrogates the global question of contemporary women’s attraction to religious traditionalisms.

In highlighting the growing disjunction between the forces of social transformation that are rapidly liberalizing modern Korean society, and a social system that continues to uphold key patriarchal structures on both societal and familial levels, Chong relates women’s religious involvement to the contradictions of South Korea’s recent socio-cultural changes and complex engagement with modernity. By focusing on the ways in which women’s religious participation constitutes—both spiritually and institutionally—an important part of their effort to negotiate the problems and dilemmas of contemporary family and gender relations, this book explores the contradictory significance of evangelical beliefs and practices for women, which simultaneously opens up possibilities for gender negotiation/resistance, and for women’s redomestication.