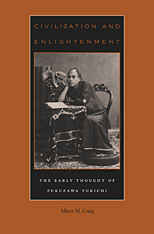 The Early Thought of Fukuzawa Yukichi

The idea that society progresses through stages of development, from savagery to civilization, arose in eighteenth-century Europe. Albert Craig traces how Fukuzawa Yukichi, deeply influenced by the Scottish Enlightenment, “translated” the idea for Japanese society, both enriching and challenging the concept.

Fukuzawa, an official in the Tokugawa government, saw his career collapse when the shogunate ended in 1867. Reinventing himself as a thinker and writer, he made his life work the translation and interpretation of the Western idea of the stages of civilization. He interpreted key Scottish intellectuals—Adam Smith, Adam Ferguson, William Robertson, John Millar; relied on American geographies to help explain how societies progress; and focused on invention as a key to civilization.

By defining the role of “less developed” nations in the world order, Fukuzawa added a new dimension to the stage theory. But by the end of the 1880s, he had come to dismiss the philosophy of natural rights as “the fatuous idealism of Christian ministers.” Though civilization—as represented by Britain—was still his goal for Japan, he no longer saw the West as a uniformly beneficial moral force.

This engaging history offers an illuminating look at an important figure and the world of ideas in nineteenth-century Japan.