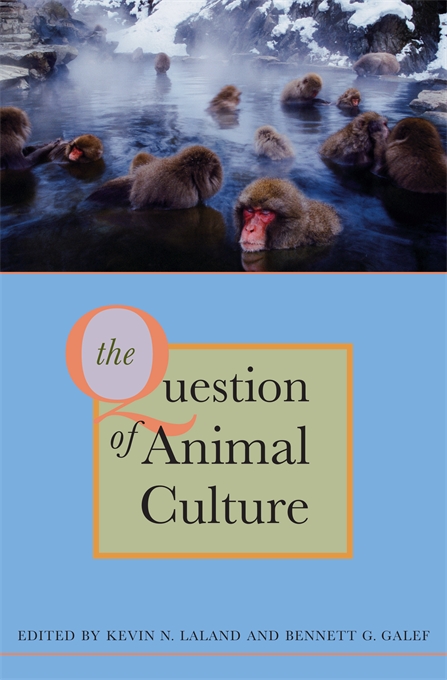 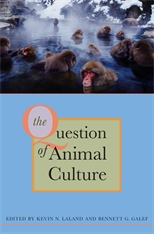 The Question of Animal Culture

“The Question of Animal Culture, edited by Kevin N. Laland and Bennett G. Galef, is the first, most scientific, and challenging look at what culture means for animals ranging from birds to nonhuman primates… The Question of Animal Culture is well written and well organized, the authors are the giants in the field, the research is rigorous, the issues and topics are discussed and argued convincingly, and the book is fun and interesting to read. This landmark compendium of current thought describes well the serious debate about culture in animals. I recommend it highly.”—Joanna Burger, BioScience

“This is a must-read volume not only for the ‘culture soldiers’ directly involved in this debate, but also for anyone curious about this question… The result is a milestone that I think will elevate the debate from the current stalemate. I conclude from this book that, like for any other phenomena associated with living systems, when it come to cultures, all is not black or white; there are shades of gray.”—David Lusseau, Quarterly Review of Biology

“Are the learning processes involved in the social inheritance of animals the same or different from those involved in the cultural transmission of humans? Having witnessed inconclusive debates between biologists who regard animal culture as obvious and social anthropologists who regard it as absurd, I found this collection of essays fascinating. This thoughtful book has lifted the debate onto a level where it might be possible to answer the question of whether or not the antecedents of human culture can be found in other animals.”—Sir Patrick Bateson, University of Cambridge

“Reading this book is like sitting ringside, watching the authors duke it out over the nature and uniqueness of our cultural prowess.”—Marc D. Hauser, author of Moral Minds

“Laland and Galef have assembled some of the best minds in the business to review the evidence for socially transmitted behaviors in animals and to consider the extent to which creatures such as chimpanzees, orangutans, and whales can be said to have ‘culture.’ Opinions vary widely, but each chapter is characterized by rigorous assessment of available evidence, providing the most thoughtful and comprehensive assessment to date concerning the question of animal culture. In particular, the book marks a watershed opening up a much-needed dialogue between cognitive psychologists and animal behaviorists on the one hand, and cultural anthropologists on the other about the special role culture played in the evolution of human animals.”—Sarah B. Hrdy, author of Mother Nature: A History of Mothers, Infants, and Natural Selection