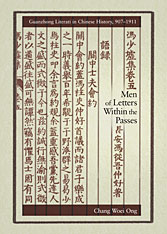 Men of Letters within the Passes

The main theme of this book is the interaction between two “places,” China and Guanzhong, the capital area of several dynasties. It addresses such questions as What do we mean by “local”? Did the inhabitants of a locality believe that being “local” required them to assume a certain identity? If so, how did they talk and write about it? Were there spatial and temporal differences in the representation of locales? This work examines how Guanzhong literati conceptualized three sets of relations: central/regional, “official”/“unofficial,” and national/local. It further traces the formation over the last millennium of the imperial state of a critical communal self-consciousness, the role of this consciousness in constructing a local identity and promoting an “unofficial” space for nonofficial elite activism, and the effect of the presence (or absence) of this consciousness on literati views of central-regional relationships. The issue here is not whether there can be a shared national culture, but whether this culture can be perceived as having regional variations and therefore contributing to the formation of a local identity.