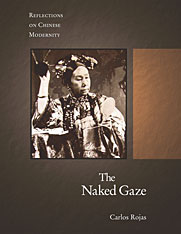 This is a study of visuality in early modern and modern China. Its focus, however, is not so much on imagery per se but rather on how vision itself has been conceived, imagined, and deployed in a variety of discursive contexts. Of particular interest is how these discourses of vision have been used to articulate issues of gender and desire, and specifically processes of gendered subject formation. Through detailed readings of narrative works by eight authors of the nineteenth and twentieth centuries—ranging from the canonical to the popular to the esoteric—the study identifies three distinct constellations of visual concerns corresponding to the late imperial, mid-twentieth century, and contemporary periods, respectively. At the same time, however, it argues that those historical periodizations themselves do not reflect a smooth, unidirectional temporal movement; rather, they are the result of a complex process of retrospection and anticipatory projection. The goal of this volume is to use a focus on tropes of visuality and gender to reflect on shifting understandings of the significance of Chineseness, modernity, and Chinese modernity.