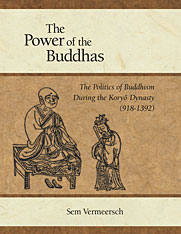 The Power of the Buddhas

Buddhism in medieval Korea is characterized as “State Protection Buddhism,” a religion whose primary purpose was to rally support (supernatural and popular) for and legitimate the state. In this view, the state used Buddhism to engender compliance with its goals. A closer look, however, reveals that Buddhism was a canvas on which people projected many religious and secular concerns and desires.

This study is an attempt to specify Buddhism’s place in Koryo and to ascertain to what extent and in what areas Buddhism functioned as a state religion. Was state support the main reason for Buddhism’s dominance in Koryo? How actively did the state seek to promote religious ideals? What was the strength of Buddhism as an institution and the nature of its relationship to the state? What role did Confucianism, the other state ideology, play in Koryo? This study argues that Buddhism provided most of the symbols and rituals, and some of the beliefs, that constructed an aura of legitimacy, but that there was no single ideological system underlying the Koryo dynasty’s legitimating strategies.