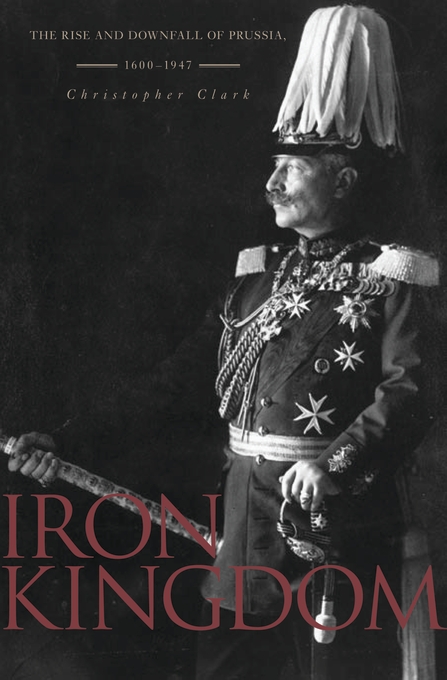 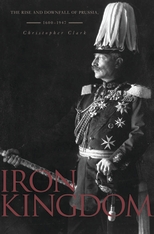 “Iron Kingdom, Christopher Clark’s stately, authoritative history of Prussia from its humble beginnings to its ignominious end, presents a much more complicated and compelling picture of the German state, which is too often reduced to a caricature of spiked helmets and polished boots. Prussia and its army were inseparable, but Prussia was also renowned for its efficient, incorruptible civil service; its innovative system of social services; its religious tolerance; and its unrivaled education system, a model for the rest of Germany and the world. This too was Prussia—a tormented kingdom that, like a tragic hero, was brought down by the very qualities that raised it up. Mr. Clark, a senior lecturer in modern European history at Cambridge University, does an exemplary job. A lively writer, he organizes masses of material in orderly fashion, clearly establishing his main themes and pausing at crucial junctures to recapitulate and reconsider. Prussia, a self-invented artifact right down to its name, demands the kind of careful demythologizing that it receives from Mr. Clark, who gently but insistently exposes the flaws in most of the received wisdom about his subject. A result is an illuminating, profoundly satisfying work of history, brightened by vivid character sketches of the principals in his drama.”—William Grimes, The New York Times

“To account for the rise and tumultuous extinction of Prussia is to explain how contemporary Europe came to assume its current form. It is a vast, Zeppelin-sized historical challenge; but it is also one to which Christopher Clark rises triumphantly, piloting his enormous subject through the best part of four centuries, traversing en route most of the continent of Europe, and carrying the reader with him on a bracing and exhilarating ride… For sheer range and intellectual horsepower, this book ranks as the best history of Prussia currently available in any language. However, more than that (and here it beats its German rivals hands-down), it is written with a literary finesse and narrative elan that establish its author as one of the finest writers of history at work in Britain today. It is a virtuoso performance.”—John Adamson, The Sunday Times

“This book can…be read for sheer pleasure… It is the pleasure of discovery that Christopher Clark offers in this account of the rise and fall of Prussia… Prussia was much more than its wars, but without its wars it would not have been Prussia, and they and their protagonists (Mr. Clark’s Bismarck is priceless), origins, conduct, and consequences occupy a large part of this excellent book, which scholars of Germany and Prussia will want to ponder very carefully, and which many an unencumbered reader will simply enjoy.”—Edward N. Luttwak, The New York Sun

“From the military and agricultural innovations of Frederick the Great to nineteenth-century high academic politics to Bismarck’s social-security system, this magisterial and remarkably well-written history of Prussia traces back to the eighteenth century the region’s surprisingly tolerant and intellectually rich culture. Clark, a Cambridge historian, suggests that the world is poorer for Prussia’s absence.”—Benjamin Healy, The Atlantic

“[A] valuable book… [Clark] shows how complicated the history of Prussia really was, and how exciting were the contrasts in its history between religious tolerance and intolerance, enlightenment and obscurantism, centralized power and regional particularism, the rule of law and ruthless authoritarianism… Prussia and its army were full of contradictions, and Clark analyzes them astutely in his book, which is certainly the best recent history of Prussia… [A] masterpiece in which charming anecdotes and serious intellectual analyses mix comfortably with political and military history and descriptions of cultural and social phenomena… Clark’s book seldom becomes dull, owing to the elegance of its style and the colorfulness of some of its powerful characters.”—Istvan Deak, The New Republic

“The story of Prussia is one that has been told many times, but seldom as intelligently, elegantly and interestingly as it is here. Christopher Clark has written a monumental history of a state that started from small beginnings as the Mark of Brandenburg, grew in size, violence and pretensions, and ended up being destroyed forever in 1947, when the victorious Allies decided they had had enough of this troublesome phenomenon… The bulk of a fascinating text, littered with intriguing detail and wry observation, focuses on this transformation in the 200 years from the bloody Thirty Years War in the 17th century (which cost Prussia half its population) to the creation by the Prussian nobleman Otto von Bismarck of a German Empire in 1871… Clark has written a masterly synthesis of [the] many disparate strands in a long and ultimately forlorn history.”—Richard Overy, The Daily Telegraph

“It is only by contrary example that this book may remind us how miserable some hastily written products of the recent ‘history boom’ have been. Clark is not one to swagger over the dead, secure in the knowledge that they cannot answer back. Instead, this is a well-informed and fair-minded historical investigation, written by a man who is plainly fascinated by the changing circumstances under which lives are lived and decisions made. One of the pleasures of this book is to watch Clark weighing the undeniable otherness of the past and resisting any tendency to convert it into a costume drama.”—Patrick Wright, The Guardian

“Many states have been conquered, partitioned, occupied, ‘ended’ and even destroyed. Prussia is unique in that it was formally abolished by decree of the British, American, French and Soviet victors in February 1947, after it ceased to exist in any meaningful sense… Christopher Clark begins Iron Kingdom, his history of ‘the rise and downfall of Prussia,’ with this famous decree, but his remarkable book is not another exorcism, nor an uncritical celebration. He provides a sophisticated yet accessible account of how a middling German dynasty manoeuvred its way into the European pentarchy of powers.”—Brendan Simms, The Independent

“Iron Kingdom is a triumph of scholarship and imagination. This is a big book in every sense—at almost 800 pages, it’s not one to slip in your briefcase for the train—but it zips along in a manner that belies its weight. In part this is because Clark writes so elegantly. This is history in its ‘grand sweep,’ but his vivid sketches of characters, places and events lighten the narrative. Yet for all its entertainment value, Iron Kingdom is at heart an unflinching engagement with one of Europe’s most complex and far-reaching political and cultural entities, spanning four centuries of history and, he suggests at the end, even beyond.”—Richard Aldous, The Irish Times

“You couldn’t have the triumph and the tragedy of Prussia better told. Christopher Clark has a voracious appetite for detail and a tart turn of phrase. His study of Prussia, from beginning to end, vividly paints one of the big pictures of European history.”—Peter Preston, The Observer

“Clark’s book, a survey of Prussian history from 1600 to 1947, is well-written, even sometimes sprightly, although it is hard to make easy reading of matters such as Pietism or the administrative reforms of the Baron Stein. Iron Kingdom’s triumph lies in a narrative structure that is even more impressive than the mass of detail that forms it; and one feels secure in the hands not only of a scholar but of a humane and fair interpreter of history.”—Max Egremont, The Spectator

“A massively impressive history of Prussia that surely takes its place as the definitive history of this much-maligned state. Elegant, entertaining, nicely illustrated and full of arresting characters, this is a terrific book.”—Dominic Sandbrook, The Daily Telegraph

“Iron Kingdom is not just good: it is everything a history book ought to be. The research is scholarly but never obtrusive, the prose sprightly but never flippant, the judgements bold but always sound… The nemesis of Prussia has cast such a long shadow that German historians have tiptoed around the subject. Thus it was left to an Englishman to write what is surely the best history of Prussia in any language.”—Daniel Johnson, The Sunday Telegraph

“This beautifully written and brilliantly argued longer study will reward scholars, students, and educated laypeople who invest the time to read it… [A] riveting narrative.”—C. Ingrao, Choice

“Chris Clark’s new history of Prussia trumps all existing accounts. It commands four centuries of complicated history with extraordinary assurance. Its clear and confident argumentation, illuminating concreteness of detail, and sheer richness of texture make it the ideal general history.”—Geoff Eley, author of A Crooked Line: From Cultural History to the History of Society

“Lucid, learned, and light-touched, this comprehensive history of the Prussian state and the society it molded eclipses its rivals, both Anglo-American and German. Its well-crafted narrative form is reader-friendly, while the interpretation it offers will impress seasoned specialists with its sophistication, knowledgeability, and freedom from stereotype and ideas of predetermined destiny. It will be required reading for all students of the history of modern Germany.”—William Hagen, author of Ordinary Prussians: Brandenburg Junkers and Villagers, 1500–1840

“Prussia was a project for state power invented by monarchs and landlords, generals and civil servants from the vulnerable provinces of north central Europe—slowly mobilizing civic loyalties and reinvented for an age of German nationalism and encroaching democracy. In this epic volume, Christopher Clark enriches classic scholarship with the most recent findings to write Prussia’s 500-year story from its unpromising Brandenburg origins through its manipulation by the Nazis and final dissolution by the postwar Allies as the byword for German aggression.”—Charles S. Maier, author of Among Empires: American Ascendancy and Its Predecessors

“Clark’s great accomplishment is to tell the story of the Prussian state’s rise and fall in a splendid and compelling way. His interpretation is a sustained critique of the still widely accepted view of Prussia’s deviation from the western norm that led to the catastrophes of war and dictatorship in the twentieth century. Iron Kingdom is by far the best account of Prussia in English and as good as anything I know in German as well.”—James J. Sheehan, President of the American Historical Association

“This book is everything its subject is supposed not to be: it’s sparkling, light-footed and intellectually supple at every turn. Even more refreshingly, it narrates the story of a Prussia that was itself the source of much that was socially and intellectually progressive. The history of Prussia is a history of the West: we are all Prussians one way or another. This humane book, with its unflagging narrative sweep and deftness of touch, reveals the truth of that surprising statement.”—James Simpson, author of Reform and Cultural Revolution