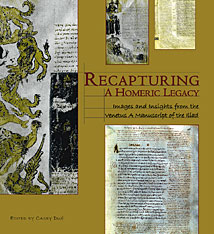 Images and Insights from the Venetus A Manuscript of the Iliad

Marcianus Graecus Z. 454 [= 822], known to Homeric scholars as the Venetus A, is the oldest complete text of the Iliad in existence, meticulously crafted during the tenth century CE. An impressive thousand years old and then some, its historical reach is far greater. The Venetus A preserves in its entirety a text that was composed within an oral tradition that can be shown to go back as far as the second millennium BCE, and the writings in its margins preserve the scholarship of Ptolemaic scholars working in the second century bce and in the centuries following.

Two thousand years later, technology offers a new opportunity to rediscover this scholarship and better understand the epic that is the foundation of Western literature. The high-resolution images of the manuscript that accompany these essays were acquired by a multinational team of scholars and conservators in May 2007.