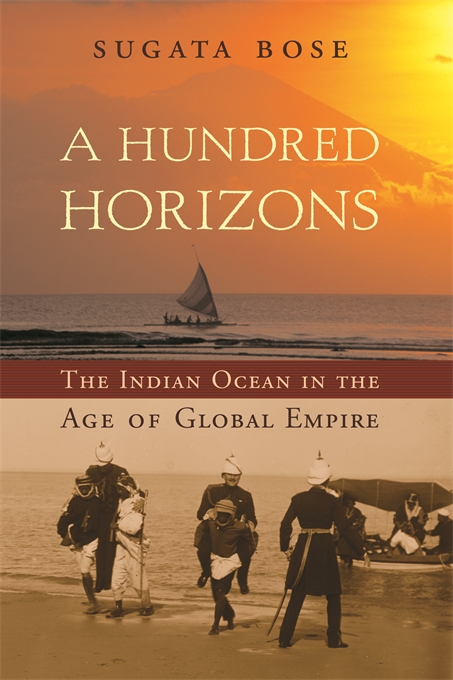 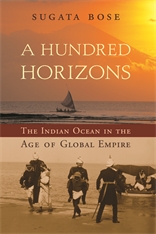 The Indian Ocean in the Age of Global Empire

“A bold, timely, at times overambitious book, Bose seeks to carry the ocean’s history firmly into the nineteenth and early twentieth century… It is thought-provoking, and it creatively suggests how many more histories of the Indian Ocean still remain to be written.”—David Arnold, The Times Literary Supplement

“A Hundred Horizons is an empirically rich work based on a careful and creative use of primary sources. The author couches his arguments in social theory, but does so in a graciously understated way. Heavy theorizing never muddles the narrative, and the writing remains crisp and accessible.”—Martin M. Lewis, Geographical Review

“This book transcends maritime history and makes a much wider contribution to historical practice…[and] deserves a very wide readership… It has relevance for Indian Ocean studies certainly in its interpretation of the last two centuries. However, it has a wider significance, for it critiques the fashionable notion of globalization, and shows how a concentration on a less ambitious yet still all-encompassing unit, that is an interregional area such as the Indian Ocean, may often be a more revealing unit to analyse.”—Michael Pearson, International Journal of Maritime History

“A Hundred Horizons [is] a profoundly hopeful book, not only in its message but also in the further diverse histories of the Indian Ocean world that it seeks to provoke.”—Ned Bertz, Journal of World History

“Sugata Bose has brought together social, cultural and political history to create a superb study of the peoples of the Indian Ocean littoral during the age of European imperialism and anti-colonial nationalism. This is a major contribution to the history of India, Southeast and West Asia and it provides a critical plane of analysis between histories of ’globalization’ and histories of regions.”—Christopher Bayly, coauthor of Forgotten Armies: The Fall of British Asia, 1941–1945

“Sugata Bose has opened up new horizons in oceanic history that provide contemporary globalization with rich cultural genealogies and social geographies. This is interdisciplinary and interregional history at its best: the great global themes of migration, trade networks, and political sovereignty are explored with a scholar’s scrutiny and a storyteller’s eye. This is a work of impeccable research and considerable imaginative reach.”—Homi Bhabha, Harvard University

“Sugata Bose has given us an excellent historical study, which is both interesting in itself (even for non-historians) and full of contemporary relevance for understanding an important ancestry of present-day globalization.”—Amartya Sen

“Through the voyages and voices of sea-going South Asians in modern times, A Hundred Horizons offers a new perspective on the major upheavals of the nineteenth and twentieth century. Sugata Bose eloquently recovers the Indian Ocean as an important space for both anti-colonial action and universalist aspiration.”—Kären Wigen, Stanford University