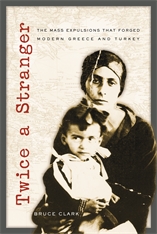 The Mass Expulsions that Forged Modern Greece and Turkey

“In Twice a Stranger: The Mass Expulsions that Forged Modern Greece and Turkey, Bruce Clark, the international security editor of The Economist, explores…the population exchange that helped create modern-day Greece and Turkey. Weaving together a rich variety of sources—interviews with some of the last surviving eyewitnesses, documents and accounts from the time, research by local historians in Greece and Turkey—Clark tells both the diplomatic and human stories of the exchange. He shows how 20th-century nationalist ideology affected the lives of ordinary people caught in its wake, raising complicated issues of identity that transcended each side’s claims about who was ‘Turkish’ and who was ‘Greek.’”—Belinda Cooper, The New York Times Book Review

“Clark’s book is a timely reminder not only of man’s inhumanity to man, and of our duty to avoid it, but also of the fact that throughout most of modern history it was considered right and natural that war and conflict should be ended by treaty, and that unless and until someone was able and willing to reverse the situation on the ground, the treaty would normally follow the maxim ‘what you have you hold’ (uti possidetis). While making explicit the price that had to be paid for peace between Greece and Turkey, Bruce Clark does not shirk from what he calls ‘a truth that is awkward from a liberal, modern point of view’—the fact that the price was not wasted. He has written a book that can be read, not with pleasure, but with interest, and certainly with profit.”—Andrew Mango, The Times Literary Supplement

“Clark treats brilliantly both the macrohistory of the war and diplomacy leading to the expulsions and the several local histories of those different communities uprooted in order to become Turks living in Turkey and Greeks living in Greece.”—L. Carl Brown, Foreign Affairs

“[Clark] knows Greece and Turkey deeply and at first hand, and shows admirable fair-mindedness as well as the clever manner of presentation which you have to have if these complicated matters are to be explained to a foreign readership… Bruce Clark brings up the factual baggage-train, and good for him.”—Norman Stone, Literary Review

“Clark’s refugees are a valuable corrective to the policymakers’ fondness for organizing other people’s lives, and…the tinge of nostalgia which permeates this lucid analysis offers its own message for the future.”—Mark Mazower, London Review of Books

“In this marvellous book, Bruce Clark contrives to interleaf the macro (or megalo) story with the micro one. He presents a lucid summary of the events that led to this state-sponsored deportation… Clark has a real sympathy for his subjects as well as his subject, he has a true facility in Greek dialects and he manages to evoke a genuine melancholy while avoiding the sentimental… In Bosnia and in Kosovo most recently, international statecraft has been concerned more with redressing previous cleansings than with cementing or confirming them, and the Lausanne precedent is often cited as the negative one. Bruce Clark’s book furnishes ghostly and ghastly evidence that for all its difficulties this policy is probably more practical as well as more ethical. I must add that he writes in that almost invisibly good and clear English that I thought had begun to die out of our journalism.”—Christopher Hitchens, The Spectator

“[A] brilliant book… Coming from Northern Ireland, Clark is well placed to comment on this riot of religious, ethnic, historical and political tensions. His analysis of the broad picture and the horse-trading at Lausanne is fair and unsentimental… Twice a Stranger is a book that needed to be written, and Bruce Clark has achieved it superbly. He has made a complex subject accessible. Anyone with an interest in Greece or Turkey ought to read it.”—John de Falbe, The Daily Telegraph

“[An] excellent new book… The power of Clark’s book lies not in its diplomatic history, which is concise and balanced, but in his sympathy for the communities and individuals wrenched from their real homes and dumped in alien ‘homelands’… Clark finds abundant space for the complex communities whose religion, language and customs no longer fitted in a world re-ordered by the dreadful simplicity of nationalist ideology.”—Daniel Howden, The Independent

“Read Bruce Clark’s excellent Twice a Stranger on the effects of the Lausanne population exchange and the psyche of modern Greece.”—Roger Cohen, The New York Times online

“A book about something that happened in the 1920s cannot always be expected to raise acute questions about the world today; the power of this book is the terrifying way that it does… Clark has tracked down nonagenarian Greeks and Turks who remember the pre-exchange world.These reminiscences, plus the story of the exchange, are judiciously intertwined to make for a pacy read, which also explains how the exchanges forged modern Greece and Turkey.”—Tim Judah, The Observer

“[A] thoughtful and deeply moving book.”—Michael Kerrigan, The Scotsman

“Absorbing and thorough… Clark’s history is welcome for shedding light upon this ‘giant divorce settlement,’ an event that is barely known beyond the Aegean, largely because its architects were quick to close the book on a pitiless exercise in political expediency… With Turkey’s ongoing interest in joining an insistently multicultural European Union, and the current state of relations between Muslims and the West, Twice a Stranger cannot fail to ring with topical resonance… This is a welcome and readable account of what it means to be twice a stranger: both in the place where you were born and in the place where you grow old.”—Jeremy Seal, The Sunday Telegraph

“A wise new book… Clark is particularly good on the human cost of the exchange, which he illustrates with first-hand testimony, much of it new, of almost unbearable poignancy.”—Brendan Simms, The Sunday Times

“Clark’s impressive work leads us through the negotiations, agreements and aftermath of the 1923 Lausanne Convention… Bruce Clark tells his history with compelling clarity and doesn’t neglect the human side. The book’s sympathies lie with the ordinary people of all communities, uprooted by forces beyond their control.”—Jimmy Roussounis, Ham and High

“The story of this ‘population exchange’ and its ramifications is evocatively told by Bruce Clark… [He] blends the personal histories of refugees and their descendants with an astute account of the larger diplomatic forces that shaped their lives… The scars of this population exchange are still visible in Greece and Turkey today—in ruined and abandoned churches and mosques, and also in familial ties that span the Aegean… Clark warns us that ethnic resettlement, even with a transparent veneer of respectability bestowed by the international community, is a tragedy with repercussions that last long after families are transplanted and borders redrawn.”—Michael Petrou, Maclean’s

“Bruce Clark’s fascinating account of these turbulent events draws on new archival research in Greece and Turkey, and interviews with some of the surviving refugees, allowing them to speak for themselves for the first time.”—New Europe

“While Greece and Turkey remain antagonistic, there lingers a deep cultural and emotional tie between them which is puzzling to outsiders, and which Clark’s excellent book does much to explain… The story Clark tells is complex, but it reminds us that ethnic homogeneity—the dream of nationalists throughout the last century—is illusory. Multiculturalism is not new, it is a return to what was the normal state of affairs before the upheavals of the 20th century.”—Andrew Crumey, Scotland on Sunday

“[A] meticulously researched and balanced account… This book is an important piece of history, for Clark has captured some of the memories of the last, nonagerian, survivors of the expulsion. His knowledge of Greek brings alive recollections that will soon go to the grave.”—Marcus Tanner, The Tablet

“[Clark’s] fascinating and moving account of those turbulent times—with first-hand testimony from those involved—sheds new light and meaning on an enormous exercise in ethnic engineering… [An] important new book.”—Keith Richmond, The Tribune

“Twice a Stranger never loses sight of the painful experience of losing homes and homelands. Clark skilfully presents many poignant firsthand accounts of the population exchange. He draws on both his own interviews with Greeks and Turks and work by local historians such as Iskender Özsoy, a journalist from the town of Tuzla on the Sea of Marmara. Özsoy regrets that his work did not start even sooner; but Clark, Özsoy, and others fortunately did not wait until it was too late altogether. Clark, for his part, has compiled a remarkable body of testimony about the heavy human cost of forced migration… Twice a Stranger is a fascinating book that should be read.”—Ben Lieberman, Journal of Genocide Research

“Clark presents a nicely written, journalistic narrative history of the 1923 Greek–Turkish population exchange that followed WWI. He discusses in an engaging and often poignant style the deportation of the nearly two million citizens—Orthodox Christians from Turkey and Muslims from Greece—that was overseen by a recently formulated international community and implemented by the postwar Turkish and Greek governments. Clark does an excellent job of bringing readers into the story at the levels of both what he calls ‘high politics’ and the ‘lives of ordinary people.’”—R. A. Miller, Choice

“At the conclusion of a bloody war in 1923, Greece and Turkey agreed to a ‘population exchange’ that sent over a million Turkish Orthodox Christians to Greece and nearly half a million Greek Muslims to Turkey. The result, argues this absorbing study, was a humanitarian nightmare that sheds light on the conundrums of religion, ethnicity and identity in the modern age… Clark contends that the mass expulsions were a model for similar, sometimes de facto, transfers after WWII in Europe, India and Palestine; his gripping, sensitive history highlights the costs of such expedient policies.”—Publishers Weekly