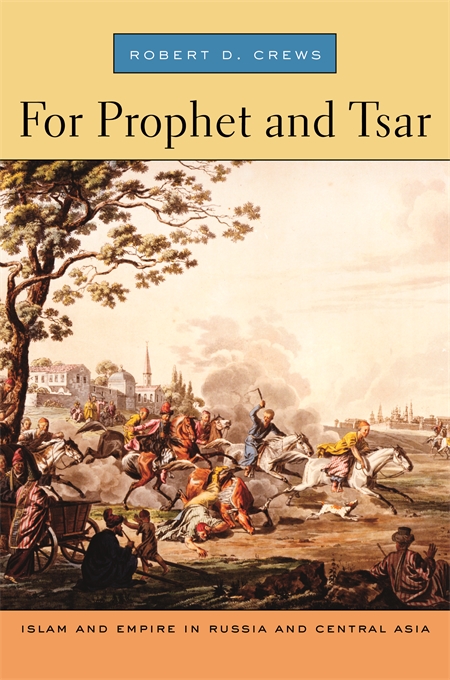 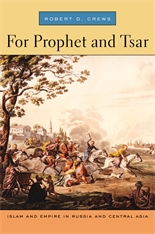 For Prophet and Tsar

Islam and Empire in Russia and Central Asia

“For Prophet and Tsar is an original and revelatory book. Clearly written and well researched, it sheds new light on the complex interplay between the imperial state and its Muslim subjects in a way that may illuminate contemporary debates about how to secure the allegiances of Muslim populations in modern Western states. Crews’s analysis of the imperial politics of religion presents a cogent and persuasive explanation of the Russian empire’s relative stability in its Muslim territories during the long nineteenth century. It is refreshing to see the question posed this way, not with a view to discovering the social forces that undermined the empire in the longer run, but with a view to understanding the sources of the empire’s durability. For what strikes one about the Russian empire is not that it collapsed, as all empires do, but rather that it managed to survive so long (and resurrect itself in the Soviet era) in such a vast and backward landmass as Eurasia, where the Russians were themselves more than a large minority.”—Orlando Figes, The New York Review of Books

“[An] original and insightful book… Mr. Crews’s research, much of it conducted in the newly accessible archives of provincial Russian places such as Ufa and Kazan, is of huge relevance to the present day. Although modern Russia has a secular constitution, not a theocratic one, some elements of the old relationship between the state and Russian Orthodoxy are being rebuilt.”—The Economist

“Crews provides an important corrective to the usual understanding of Russia’s imperial rule over its Muslim peoples… Crews’ case for Muslim adaptation to a Christian empire is carefully and impressively drawn, and explains more than any previous history why Muslims, who have lived with Russians for 500 years, were not especially confrontational or antagonistic toward the ‘ruling nationality.’ With this rich and subtle book, Crews forces us to rethink our current Manichean division of the world into us and them.”—Ronald Grigor Suny, The Moscow Times

“Crews’s book is solid and enlightening, and his research is prodigious, documenting a century and a half of the state’s role as mediator, enforcer, and supreme resource for the claimants to the leadership in Muslim communities. Crews has studied police reports, court records, the writings of Russian Muslim clerics, and the petitions of Muslim subjects, and he comes away with a fascinating and important story, which he tells skillfully.”—Leon Aron, The New Republic

“Crews has uncovered ample evidence, and developed a well-reasoned analytical argument, to defend his thesis that ‘prophet and tsar’ were compatible, not antagonistic poles of loyalty within the Russian empire. No author to date has achieved as much. His book is recommended reading to anyone interested in the history of relations between Western colonial empires and their Muslim subjects.”—Daniel Brower, International History Review

“Robert Crews’s For Prophet and Tsar is a work of historical scholarship, but it speaks directly and effectively to today’s burning debates. Drawing attention to the ways in which the Tsars simultaneously used and promoted Islam as a tool for co-opting and controlling its far-flung Muslim populations, Crews implicitly addresses three crucial issues… Crews has written a splendid book that should be read by anyone interested in contemporary Russia, Central Asia, or the predicaments and challenges of Muslims in states not usually identified with Islam. It will foster both debate and a research agenda for many scholars to come. Moreover, it is a good read.”—Edward Schatz, Middle East Journal

“Stanford historian Robert Crews’s For Prophet and Tsar is a well-researched, timely study with relevance for current questions about Russia’s long relationship to Islam… Crews brings together the diverse interests of Russia’s empire and adeptly balnaces them to stimulate constructive thought about important issues. He demonstrates the breadth of his expertise by drawing not only on Russian historiography but also on such non-Russian language Turkestani sources such as Shihabetdin Marjani’s work in Tartar.”—Victoria Clement, The Russian Review

“Beautifully written and meticulously researched, For Prophet and Tsar casts relations between the imperial state and its Muslim subjects in an important new light. Crews demonstrates how the Russian imperial state established an important site of accommodation and mutual interest between the Muslim communities and state power. Remarkable for its chronological and geographic breadth, this book is an impressive achievement representing a major contribution to the field.”—Peter Holquist, author of Making War, Forging Revolution: Russia’s Continuum of Crisis, 1914–1921

“Lucidly written and deeply researched, this is a revelatory analysis of how the Tsarist state sought to rule its Muslim subjects. An invaluable resource for anyone interested in comparative empires, this book speaks directly to the imperial politics of religion as well as contemporary debates about how governments try to manage confessional minorities.”—Mark Mazower, author of Salonica, City of Ghosts: Christians, Muslims and Jews, 1430–1950

“This book illuminates as never before how Tsarist policies fostered structures of Islamic religious authority that came to occupy a critical position not only in the imperial administration but also in the Muslims’ own, evolving, understandings of Islam. It brilliantly demonstrates how ordinary Muslim men and women competed with the religious elite in shaping particular interpretations of Islam. This is a work of great comparative interest for the study of Islam, politics, and religious authority in the modern world.”—Muhammad Qasim Zaman, author of The Ulama in Contemporary Islam: Custodians of Change