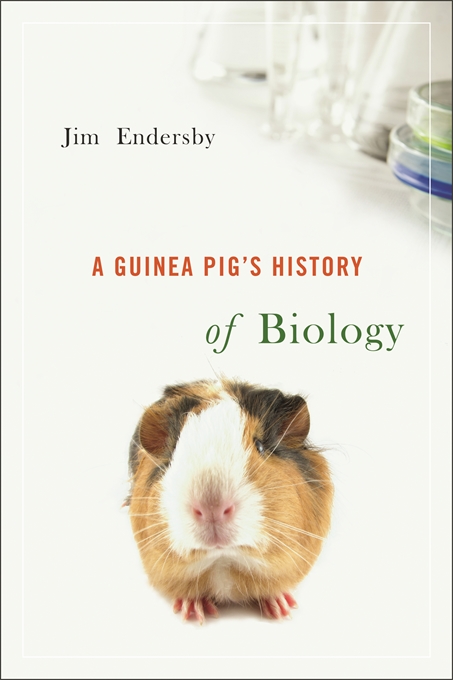 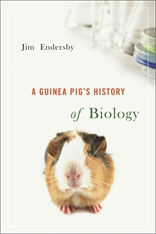 A Guinea Pig’s History of Biology

“By telling the laboratory life-stories of Passiflora, Oenothera, Drosophila, Arabidopsis and Danio, as well as the trusty Cavia porcellus and one or two others, the historian Jim Endersby reveals how humans have unravelled the mysteries of evolution, genetics and development to such an extent that we can now, up to a point, engineer life itself… Endersby introduces us to many more names, less famous but each a crucial contributor to modern biology. Through their stories he explodes the persistent myth that science is a series of eureka moments by heroic individuals, instead revealing a complex reality of social interaction and interdependence… An account that draws much of its fascination from unexpected connections. With an enviable lightness of touch, Endersby weaves his scientific threads into a much broader tapestry of cultural history… Accessible and engaging.”—Georgina Ferry, The Guardian

“Try to skim this book and you’ll find yourself drawn into reading every word. Eye-opening and entertaining, this is cutting-edge history of science that everyone should read. Discover why Charles Darwin puzzled over passion flowers, and how the most unlikely of experimental organisms—from guinea pigs to an unprepossessing cress plant—contributed to what are now hailed as landmark discoveries, as well as leading to a lot of dead ends. Throughout his gripping narrative, Jim Endersby shows how today’s right answer is almost always tomorrow’s wrong one.”—Gail Vines, New Scientist

“I completely enjoyed reading this historical account of the progression of molecular biology over the past two centuries. Dry and dull ‘geek-speak’? Hardly. It reads like a work of fiction, complete with fascinating narratives and quirky bits of detail. Clearly the author put a great deal of effort into thoroughly investigating and communicating both the scientific and human sides of this topic… Dr. Endersby does a fascinating job of connecting society and science in this historical account of scientific progress over the last 200 years. He underlines the fact that no matter how objective scientists may try to be, they are working within social and political environments that are guiding their thought processes whether they realize it or not.”—Wendy Tymchuk, Discovery

“Charming… The book offers lay readers an engaging and lively introduction to the history of biology.”—Vassiliki Betty Smocovitis, Science

“As Jim Endersby notes in his fascinating A Guinea Pig’s History of Biology, progress in biology owes as much to the hawkweed and the humble corncob as it does to the brainstorms of scientists. Mr. Endersby has had the happy idea of tracing the successes of modern biological research through the subjects which have made it possible… In Mr. Endersby’s account, the history of modern biology is a story of challenged assumptions, of refusing to accept easy explanations, of a willingness to ask apparently silly questions and to pursue the answers to them with astonishing doggedness… Whether he is discussing Robert Koch and the development of germ theory or the intricacies of Gregor Mendel’s lifelong research on the genetics of peas, Mr. Endersby presents an admirably lucid explanation of both the scientific issues at stake and of the human and social factors that influenced the course of the research. In his narrative, the scientists, from the explosive J.B.S. Haldane to the flamboyant Barbara McClintock, come to life in all the grandeur of their genius as well as their quite considerable wackiness. At the same time, he never loses sight of the fact that these remarkable figures worked among a throng of silent and involuntary collaborators. Without the primrose, the guinea pig, the zebra fish, and the ear of corn, even the least of life’s secrets might have slipped from our grasp.”—Eric Ormsby, The New York Sun

“Over the past two decades, dozens of popular books discussing the Darwinian perspective on the history of biology have appeared, many of them derivative and stale. Some of us are feeling rather Darwinned out. But Jim Endersby has come up with a fresh and rewarding approach. He illuminates the story of our understanding of life since 1800 (when the word biology was coined) by focusing on 12 organisms that have been most useful to natural scientists in illuminating one of life’s central mysteries, inheritance. The result is a hefty, easily readable account of the remarkable progress biologists have made over the past two centuries to enrich our understanding of life… Much of the charm of Endersby’s account derives from his meandering style and his eye for the telling incident… Endersby’s account of how zebra fish became one of nature’s most revealing organisms is a gem of popular science writing, both an entertainment and an education. It demonstrates that a talented historian can illuminate science that has come to appear jaded after too many retellings by authors with a meagre grasp of their subject’s past.”—Graham Farmelo, The Sunday Telegraph

“A highly entertaining and original book. Science is a collaborative process and by looking at the roles played by unwilling collaborators, from guinea pigs to zebrafish, Endersby provides a new perspective on the history of genetics.”—Nick Rennison, The Sunday Times

“Jim Endersby’s book is packed with strange lore about the creatures that live in laboratories, but it is no mere miscellany. He has hit upon the bright idea of telling the story of reproduction, inheritance and evolution—and how we learnt about them, by focusing on the handful of creatures that have provided most of our knowledge: the fruitfly, the zebrafish, the bacteriophage, Darwin’s passion flowers, maize, the evening primrose, the cress plant Arabidopsis and a few others. Oh, and not forgetting Homo sapiens. Endersby’s technique is a wonderfully roundabout way of telling some of the great stories of modern biology.”—Peter Forbes, The Daily Mail

“Endersby, a young historian of science, has had the neat idea of telling the stories of the creatures which became the emblems of the modern lab. It offers an unusual viewpoint on the path from natural history, which grew from observing living things in the wild, to the biological laboratory… Endersby’s engaging book covers a good range of the most important lab beasts, and chooses its stories well. It is an absorbing tale of the way our understanding of genetics has depended on a crucial set of involuntary collaborators, the unsung heroes of the laboratory.”—Jon Turney, The Independent

“I cannot imagine a finer history of the subject than Jim Endersby’s A Guinea Pig’s History of Biology. Don’t be put off by that title: the book’s chapters center on research subjects—Darwin’s passionflowers, Mendel’s hawkweeds and the horses, fruit flies, corn, zebrafish, mice and, yes, guinea pigs studied by lesser-known scientists. This is simply the best science book accessible to the non-scientist that I have read since Bryson’s Short History of Nearly Everything.”—Gerry Rising, The Buffalo News

“In many ways this book is so much more than the title suggests. The text portrays the development not only of genetics, but also of biochemistry, developmental biology, and physiology, as well as chemistry and physics. Furthermore, in a very readable style, the author recounts many periods in history, not just providing a look at science through the years, but also exploring political, economic, and social issues and showing how intimately science and scientists connect with, and are influenced by, other social trends. This book would be of interest to anyone fascinated or intrigued by genetics or biological research, as well as any professional or lay student of history and science.”—Amy Hark, Science Books & Films

“The incredible intellectual journey from Charles Darwin’s first experiments with orchids and passionflowers—starting in 1854 as he sought to unriddle the elements of heredity—to the patenting of the world first transgenic animal, OncoMouse, in 1988, is an intense and exciting voyage of discovery whose fascinating zigzags, cul-de-sacs, and milestones have seldom been charted in a more entertaining fashion than in Jim Endersby’s A Guinea Pig’s History of Biology.”—Paul DiFilippo, Barnes & Noble Review

“The conceit of this engaging book is to tell how biologists have come to understand heredity from the point of view of some of the plants and animals that have been its central subjects. From observations made in the stable and greenhouse—of Arabian mares and passionflowers—Endersby traces the development of a model organism’s approach to biology in the modern laboratory, culminating in chapters on zebrafish and Arabidopsis. More truly a history of genetics than a history of biology, the book is illuminating and entertaining throughout.”—Angela Creager, Princeton University

“A Guinea Pig’s History of Biology is a fascinatingly different take on the history of evolution, showing how science developed as a complex and fruitful interaction between individuals and the scientific world. As entertaining as it is enlightening.”—Judith Flanders, author of Consuming Passions: Leisure and Pleasure in Victorian Britain

“Endersby has written a brilliant popular history of modern biology. Having mastered a vast scholarly literature, he expertly sets the science in its cultural context, explains difficult scientific concepts clearly, and offers a wise and entertaining account of some of the most important lines of research in the study of heredity, variation, and evolution over two centuries.”—Sharon E. Kingsland, author of Modelling Nature: Episodes in the History of Population Ecology

“In this astute, charming, and witty book, Jim Endersby follows the careers of passionflowers and fruit flies, mice, and fish and helps overthrow a host of myths that have beset the history of biology. He brings uncommon enthusiasm and infectious passion to his accounts of gardeners and travellers, farmers and priests. He shares his joy at gazing through microscopes at zebrafish, offers indispensable information about the roots of genetic modification and vivisection and concludes with a superbly judged exploration of the significance of campaigns around biotechnology and eugenics. This book will become a vital resource for anyone who cares about where our biological knowledge came from and why it matters so much to our future.”—Simon Schaffer, Professor of History of Science, University of Cambridge