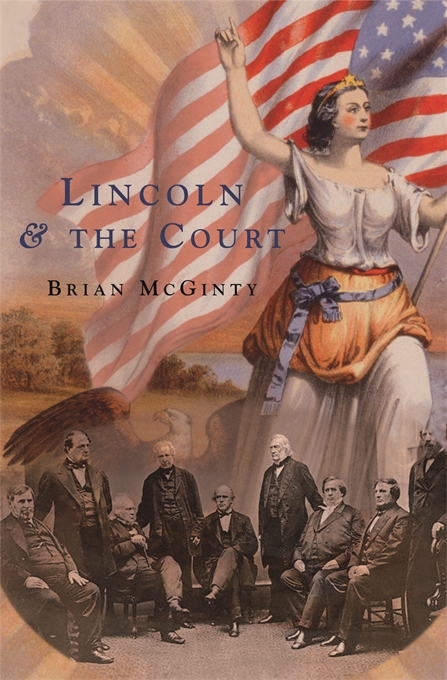 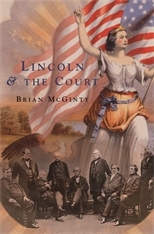 Lincoln and the Court

“[A] fascinating book… The issue of presidential power in wartime is as fresh as today’s headlines.”—Charles Lane, The Washington Post

“Lincoln and the Court addresses a subject that has been neglected, if not ignored, by historians: the story of our sixteenth president and the Supreme Court during the Civil War… Brian McGinty has written an important book for military historians… This is a well-written, tightly organized, and thoughtful book that will appeal to anyone interested in a new perspective on Lincoln’s actions as Commander-in-Chief, and the legality of measures he took to achieve a Union victory.”—Fred L. Borch, Journal of Military History

“It’s not easy to find Lincoln territory where good, open grazing land remains, but McGinty has found it. Combining expertise as an attorney and historian with a style that welcomes readers, he gives us Lincoln the lawyer-president who worked with a Supreme Court to which he ultimately appointed five members. The Civil War brought forth numerous legal conflicts, and McGinty shows that the personalities and issues involved were as vital and fascinating as those we are more familiar with on the military side.”—Margaret Heilbrun, Library Journal

“McGinty offers a lucid review of the major Civil War Supreme Court cases. The Civil War, as McGinty explains, was a struggle over constitutional interpretation: did Lincoln have the constitutional authority to do whatever he thought necessary to compel seceding states back to the Union? He thought so, but Chief Justice Roger Brooke Taney sometimes stood in his way. The first major clash was over Lincoln’s suspension of habeas corpus, which Taney declared unconstitutional in the 1861 Merryman case. In 1862 came another battle, the Prize cases, regarding the constitutionality of Lincoln’s declaring a blockade of Confederate ports. The Court also heard cases about whether a Union citizen could criticize a president during wartime and whether the Treasury Department could regulate trade between a Union state and the Confederacy. McGinty says that the Court ‘could have struck down the president’s major war measures’ but ‘chose not to do so’… McGinty’s engaging account, which treats a topic with obvious parallels to the present, will delight history buffs.”—Publishers Weekly

“McGinty’s outstanding work on Lincoln’s relationship with the Supreme Court has long been needed, and is especially trenchant as we deal anew with the limits of governmental power versus individual rights. McGinty brings a valuable background in law to this thoughtful and perceptive account of what Lincoln and the war did to and with the relationship between law and freedom.”—William C. Davis, author of Jefferson Davis: The Man and His Hour

“The most complete account to date of President Lincoln and the Supreme Court in wartime. In a beautifully written narrative, McGinty makes complicated legal issues accessible, and his descriptions of the Dickensian characters involved in this contentious and critical period are fascinating. He makes clear that of all U.S. presidents, Lincoln was the lawyer in the White House.”—Frank J. Williams, Chief Justice of the Rhode Island Supreme Court and founding chair of The Lincoln Forum