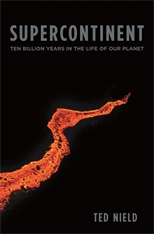 Ten Billion Years in the Life of Our Planet

“As a geologist turned science journalist, editor and provocative blogger, Ted Nield has a complex view of life and science. His skills as a writer successfully convey in Supercontinent the recent exciting work in grand-scale geoscience to a wide scientific audience… The attempted reconstructions of past and future continents and oceans is a major field of activity in contemporary geoscience. To handle it without oversimplification or getting lost in a maze of detail is no small accomplishment.”—David Oldroyd, Nature

“A fascinating and eye-opening book… In a most engaging way, Nield reveals how science has unraveled the complex evolution of our planet’s surface, and presents the reader with a tantalizing glimpse of the Earth of the distant future.”—BBC Focus

“A book that examines the romance of its subject alongside its hard science… If you don’t know much about how the planet’s crust works, Nield’s book will teach you the basics… He rocks.”—Helen Brown, The Daily Telegraph

“One of the best popularizations of geology… Giv[es] us a sense of the ancient yet powerful forces underneath us.”—P. D. Smith, The Guardian

“Both informative and entertaining. [Nield] has thought well outside any academic box, touching on a huge diversity of topics… Nield relates many subjects that are currently major foci of research in Earth history to his theme.”—Kevin Burke, Science

“An accessible account of how the Earth has several times consisted of a single island landmass and will again, in about 250 million years.”—Peter Calamai, The Toronto Star

“For centuries, people have dreamed of lost continents. Today, the author of this fascinating book shows, geologists can detect evidence of a continuing cycle of formation, breakup and reformation of one giant landmass—a supercontinent—over billions of years. Nield, editor of Geoscientist magazine, imagines what these supercontinents might have looked like and tells the stories of the scientists who have discovered and studied them… Making highly technical material understandable, Nield explains why ‘the Earth’s Supercontinent Cycle matters to everyone, everywhere.’”—Publishers Weekly

“Ted Nield tells the fascinating story of how the world has been made—and re-made—through billions of years of geological time. Geology underpins everything, yet the history of the continents on which we live has remained almost neglected. Nield has put this right with his imaginative and dynamic account of the movements of plates, and the assembly of the familiar world from an unfamiliar past.”—Richard Fortey, author of Earth: An Intimate History

“The four dimensional complexities of our happy little planet—‘earth’s immeasurable surprise’—are made elegantly accessible by Ted Nield in this truly exceptional book. At least until the next major discovery it deserves to become the standard work, ideal for students of the subject, and hugely enjoyable to those for whom the world remains an unfathomable enigma.”—Simon Winchester