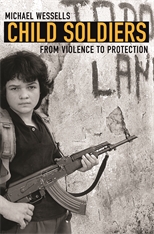 From Violence to Protection

“In the past few years, the body of literature devoted to the use of child soldiers—political and security analyses, sociological explorations, case studies of specific conflicts—has been growing. But largely unheard in these books are the voices of the child soldiers themselves… [Michael Wessells] now fills that gap in the literature with an admirable work based not just on his own extensive research but on interviews with hundreds of former child soldiers.”—J. Peter Pham, The Wilson Quarterly

“Provides a thorough introduction to the myriad problems and possibilities associated with an estimated 300,000 children who participate in military units on almost every continent.”—P.G. Conway, Choice

“Given the recent bestselling memoir of a child soldier, Wessells’s empirically driven book is a timely contribution of psychological insight that debunks gloomy notions of child soldiers as damaged goods beyond repair. Wessells’s optimism is buoyed with accounts of former child soldiers successfully reintegrated into civilian life. He links the need to protect children in conflict to the foundation of peaceful societies… The discussion on the difficulty of separating victims from perpetrators underlines Wessels’s main point that children soldiers are the result of adult exploitation of children… This is an important book for students of all levels interested in children’s rights and post-conflict reconstruction, and serves as a guide to practitioners working in this area.”—David K. Androff, Journal of Sociology and Social Welfare

“This is a crucial book. Human rights activists, physicians, and citizens around the world recognize the need to find effective interventions for child soldiers, but up to now we have lacked systematic information about them. Wessells discusses all of the major concerns: how boys and girls are recruited or enticed into guerrilla groups; how they are affected by violence, deprivation, and abuse; the role of culture and healing; and the actions we must take to save youngsters from guerrilla groups and send them home. Child Soldiers will be a cornerstone for research—and for action.”—Neil Boothby, Director, Program on Forced Migration and Health, Columbia University