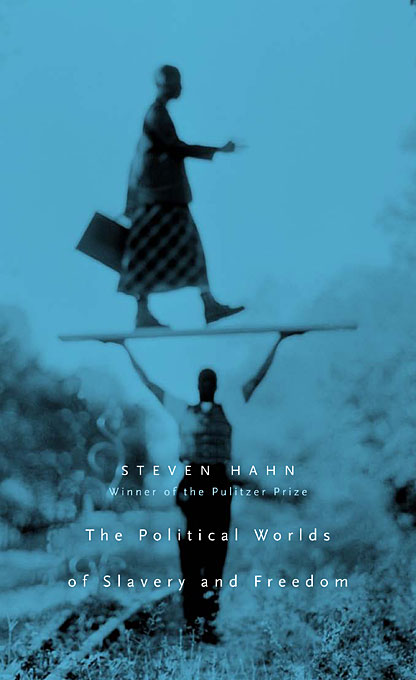 The Political Worlds of Slavery and Freedom

“Hahn has emerged as the pre-eminent historian of black politics in the apparently lost decades between the end of the Civil War and the stirrings of the modern civil rights movement… In The Political Worlds of Slavery and Freedom, Hahn explains that the decades after Reconstruction were far from a political vacuum for Southern blacks. Instead, black people worked to wring as much as they could from the promises of the Reconstruction years, then regrouped after the Confederate counterrevolution in 1877 and continued to organize… At the heart of Hahn’s critique is an attempt to recover African-Americans as political actors: to insist that, under slavery and ‘freedom,’ in the North and South, black politics was everywhere. This politics has been obscured in popular history, and even in academic circles, because it sits so poorly with two cherished myths about American history: that a commitment to freedom was a strand in the nation’s political DNA, and that black people have patiently pursued integration since 1776. Hahn wants us to be bolder in exploring the hidden corners of black history, to set aside the integrationist narrative in search of the totality of black experience.”—Nicholas Guyatt, The Nation

“We tend to think of the history of slavery in the United States in terms of bright lines separating North and South, slave and free, pre- and post-Emancipation. But this view, says Pulitzer Prize–winning historian Steven Hahn, vastly oversimplifies a complex and labile situation. Building a case against the received understanding, Hahn argues passionately in the lectures that make up this collection that the boundaries of slavery were indistinct. There were slaves and owners in the North—he reproduces an 1851 notice warning the ‘Colored People of Boston’ to ‘Keep a Sharp Look Out’ for ‘Kidnappers and Slave Catchers’—and communities of free blacks and escaped slaves even in the South, as well as a patchwork of laws and practices that reigned west of the ever mobile frontier and elsewhere outside the country’s borders. Furthermore, the perception of enslaved blacks as a powerless and inchoate mass, passive recipients of their emancipation, is belied by evidence of organized action on such a scale that Hahn considers it tantamount to a great slave rebellion unrecognized because of white America’s paternalistic myopia then and since, an intriguing proposition that is bound to stir controversy within academia and beyond.”—Amanda Heller, The Boston Globe

“No one has explained the story of emancipation, and its grassroots politics, as well as Steven Hahn. He demonstrates that the Civil War was but one turning point in a long history of resistance, rebellion, and mobilization on the part of slaves, refugee freedmen, and new post-war citizens. He crystallizes W. E. B. Du Bois’ argument, rooting it in the kind of research Du Bois could never do in Jim Crow America. Freedom came; but more so, it was seized and converted into a black politics that forever reshaped America.”—David Blight, author of Race and Reunion: The Civil War in American History

“Steven Hahn brings a luminous originality to every historical subject he touches. The Political Worlds of Slavery and Freedom makes clear, once again, why he is one of the very best American historians writing today.”—Marcus Rediker, author of The Slave Ship: A Human History

“In this important book, Steven Hahn raises and confronts compelling questions about the political activism of slaves and freed people that have been previously either ignored or insufficiently addressed. Especially intriguing is Hahn’s discussion of a black political underground from the emancipation period to World War II. This book will generate a much-needed debate among all concerned with political and cultural divisions in our society.”—William Julius Wilson, author of More than Just Race: Being Black and Poor in the Inner City