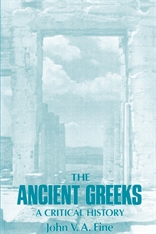 An esteemed teacher offers a major reassessment of the history of Greece from prehistoric times to the rise of Alexander. This is a work of prodigious scholarship written in grand style.

John Fine surveys the archaeological work that has revealed so much about the civilization of Crete and Mycenaean Greece, and discusses the age of colonization during which Greek colonies were established from the Crimea to the Nile, from the Caucasus to Spain. Analyzing social and economic developments, as well as foreign and inter-city affairs, he assesses the history, culture, and democracy of Athens, and Sparta’s institutions and military exploits; recounts the Greeks’ relations and then war with the Persian empire; details alliances, struggles, and the varying fortunes of the Greek city-states; and relates the rise of Macedon. Fine treats the Greeks’ story in the context of events elsewhere in the eastern Mediterranean. Throughout he indicates the nature of the evidence on which our present knowledge is based, masterfully explaining the problems and pitfalls in interpreting ancient accounts. The Ancient Greeks is a splendid narrative history and a refreshing reinterpretation that will please students of ancient history, and everyone interested in early civilizations.