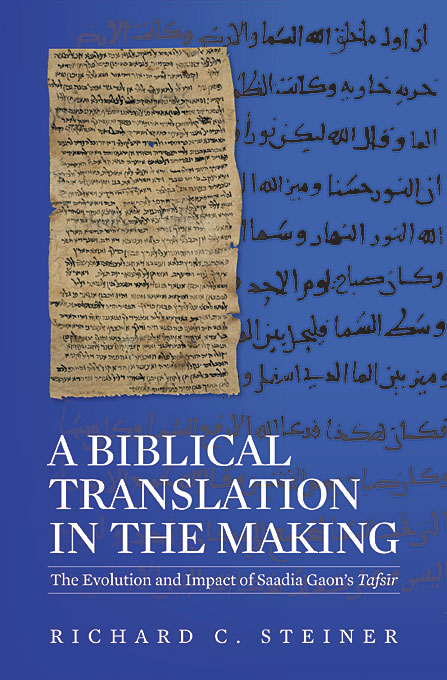 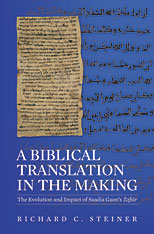 A Biblical Translation in the Making

The Evolution and Impact of Saadia Gaon’s Tafsīr

In his youth, R. Saadia Gaon (882–942 C.E.) dreamed of publishing a new translation of the Torah for Arabic-speaking Jews to replace the overly literal ones in vogue at the time. It would be a proper translation, conforming to the tenets of both traditional Judaism and contemporary philosophy—not to mention the canons of Arabic grammar and style. Saadia’s interest in this project was not purely academic. Rabbinic Judaism was under attack from Karaite and Muslim polemicists eager to win new converts, and Saadia felt that a new Arabic version of the Torah was needed to counter the attack. His dream was realized with the issuing of the Tafsīr, the most important Jewish Bible translation of the Middle Ages.

Richard C. Steiner traces the history of the Tafsīr—its ancient and medieval roots, its modest beginnings, its subsequent evolution, and its profound impact on the history of biblical exegesis. Among the many sources he uses to elucidate this history are two previously neglected manuscripts: a Christian Arabic translation of the Pentateuch from St. Catherine’s Monastery in the Sinai Desert, and a Judeo-Arabic annotated translation of Genesis from the Cairo Genizah. Steiner argues that the latter is a page from a copy of the first edition of the Tafsīr prepared while Saadia was a student in Tiberias, and the former is a copy of Hunayn b. Ishāq’s “lost” Arabic version of the Pentateuch (ninth century C.E.), containing a philosophical rendering of Genesis 1:1 adopted later by Saadia in the Tafsīr.