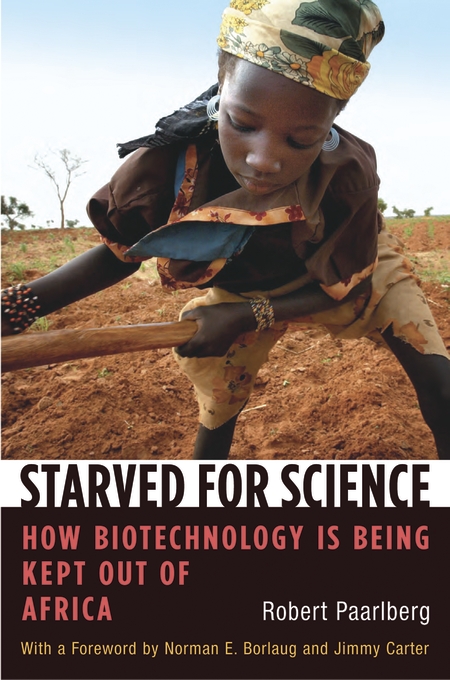 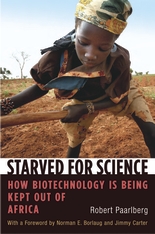 How Biotechnology Is Being Kept Out of Africa

“Condoning the cultivation of genetically modified crops for food is not, Robert Paarlberg concedes, likely to win him friends in academic circles… But in this timely book, Paarlberg, a political scientist, makes a strong argument: Europeans, who have so much food they do not need the help of science to make more, are pushing their prejudices on Africa, which still relies on foreign aid to feed its people. He calls on global policymakers to renew investment in agricultural science and to stop imposing visions of ‘organic food purity’ on a continent that has never had a green revolution. As governments look for ways of tackling what is now commonly called a ‘global food crisis’ with unprecedented price increases in basic foodstuffs, this book offers welcome food for thought.”—Jenny Wiggins, Financial Times

“[This] book ends with an alternative perspective on globalization that will inspire open-minded skeptics to rethink the matter… [Paarlberg is] a pragmatic believer in separating babies from bathwater. The fact that current applications of GM technology primarily benefit a handful of corporations does not deter Paarlberg from envisioning a scenario in which nonprofits and private African corporations might employ GM technology to serve the increasingly dire needs of African farmers… An insightful book that deftly balances the benefits and drawbacks of globalization, all within parameters conforming to the real world, the one in which we live… A clarion call for corporations and NGOs alike to revisit issues that have been ideologically polarized rather than rationally examined.”—James E. McWilliams, The Texas Observer

“[An] illuminating book on the state of science and agriculture in Africa… [It] has much of merit.”—Jules Pretty, The Times Higher Education Supplement

“This is an important book… Paarlberg has written extensively about smallholder agricultural development and genetically modified (GM) crops in Africa. Here he goes much deeper than just the GM debate to suggest that the anti-GM arguments are part of the currently fashionable trend in many international institutions such as the World Bank and leading NGOs to push organic agriculture and a European-style regulatory system in Africa--instead of promoting increased production… The author says that although well-intentioned, and perhaps appropriate in countries which have already experienced major scientific advances in agriculture, including India, China, and Brazil, these policies are leading to food shortages and agricultural disasters in Africa. Well argued and documented, if controversial.”—C. W. Hartwig, Choice

“Except for South Africa, no African state has legalized the planting of GMOs for production and consumption. While citizens of rich countries have the luxury of deciding what kinds of foods—organic, nonorganic, GMO, non-GMO—to eat, droughts and insect infestations continue to wipe out crops, and rural African children die because they have no choices. Bringing another perspective to the GMO debate [is] Paarlberg’s provocative argument.”—Joshua Lambert, Library Journal