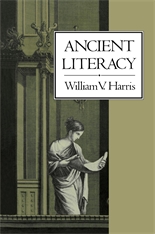 How many people could read and write in the ancient world of the Greeks and Romans?

No one has previously tried to give a systematic answer to this question. Most historians who have considered the problem at all have given optimistic assessments, since they have been impressed by large bodies of ancient written material such as the graffiti at Pompeii. They have also been influenced by a tendency to idealize the Greek and Roman world and its educational system.

In Ancient Literacy W.V. Harris provides the first thorough exploration of the levels, types, and functions of literacy in the classical world, from the invention of the Greek alphabet about 800 B.C. down to the fifth century A.D. Investigations of other societies show that literacy ceases to be the accomplishment of a small elite only in specific circumstances. Harris argues that the social and technological conditions of the ancient world were such as to make mass literacy unthinkable. Noting that a society on the verge of mass literacy always possesses an elaborate school system, Harris stresses the limitations of Greek and Roman schooling, pointing out the meagerness of funding for elementary education.

Neither the Greeks nor the Romans came anywhere near to completing the transition to a modern kind of written culture. They relied more heavily on oral communication than has generally been imagined. Harris examines the partial transition to written culture, taking into consideration the economic sphere and everyday life, as well as law, politics, administration, and religion. He has much to say also about the circulation of literary texts throughout classical antiquity.

The limited spread of literacy in the classical world had diverse effects. It gave some stimulus to critical thought and assisted the accumulation of knowledge, and the minority that did learn to read and write was to some extent able to assert itself politically. The written word was also an instrument of power, and its use was indispensable for the construction and maintenance of empires. Most intriguing is the role of writing in the new religious culture of the late Roman Empire, in which it was more and more revered but less and less practiced.

Harris explores these and related themes in this highly original work of social and cultural history. Ancient Literacy is important reading for anyone interested in the classical world, the problem of literacy, or the history of the written word.