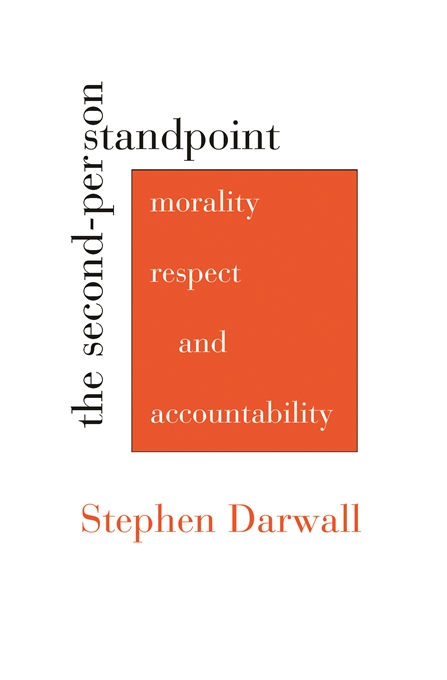 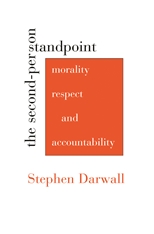 “The Second-Person Standpoint, Stephen Darwall’s innovative and engaging new book, contends that not only can we use Strawson’s argument to develop a new line on free will; we can also employ it in developing a new perspective on moral obligations… It is a mine of insight into an aspect of morality that has escaped sustained exploration. Even if it overreaches in its claim to confound consequentialism, the elements it puts in place ought to figure prominently in every account of morality, and it should help to ensure that from now on they will.”—Philip Pettit, The Times Literary Supplement

“The idea of a second-personal reason is a genuine and important advance in moral philosophy.”—Christine M. Korsgaard, Ethics

“One of the main achievements of Darwall’s book is that it provides an answer to [Anscombe’s] challenge. The authorities to whom modern moral consciousness appeals are simply you and I.”—Gary Watson, Ethics

“Darwall’s foray into this relatively untrampled philosophical terrain turns out to be enormously exciting. The result is a book which takes its place among the very best contemporary works on Kantian ethics and which ought to be regarded as required reading for any contemporary ethical theorist.”—Talbot Brewer, Philosophical Quarterly

“The Second-Person Standpoint is a rigorous and convincing volume of utmost importance to ongoing discussions of the foundations of rights and obligations in ethics and jurisprudence, as well as to the current debates on the foundations of practical rationality. Additionally, Darwall’s book is likely to be a catalyst for a new and beneficial discussion of the long neglected ethical doctrines of early-modern theological voluntarism and German idealism and the contributions these rich traditions can offer to contemporary thinking about morality, responsibility, and the dignity of persons.”—Daniel M. Layman, Review of Metaphysics

“The Second-Person Standpoint has quickly become one of the most discussed recent books in ethics. It richly deserves that honor, since it offers a thorough, intriguing and deeply thoughtful reconception of the entire sphere of morality… Darwall’s book challenges the meta-ethical presuppositions of practically every going moral theory. Darwall remains, as he has been throughout his career, strongly committed to Kantianism. But his Kantianism is now one in which a certain relationship—the relationship between an I and a you—lies deeper than even the categorical imperative. If he is right, we will need to read Kant himself in a different light.”—Samuel Fleischacker, Utilitas

“A theory regarding the form and content of moral obligation requires attention to issues in both ethics and metaphysics. Darwall’s construction of such a theory is historically informed, concisely written, and provocative in ways that extend far beyond the merely theoretical.”—H. Storl, Choice

“Stephen Darwall’s The Second-Person Standpoint: Morality, Respect, and Accountability is an important contribution to moral philosophy, and its arguments are sure to be widely discussed and debated. The book brings into contemporary philosophical debates a series of ideas centering around what Darwall calls ‘the second person’—the idea that morality is fundamentally about the demands that particular people are entitled to make on each other. Obligation, understood as what people owe to each other, has been central to recent moral philosophy, but the second person standpoint gets behind the idea of obligation and explains that in terms of the standing the particular people have to make claims against each other. These ideas have been of great significance in the history of philosophy, but that have not attracted the attention of philosophers in recent decades. This is a fascinating and important book.”—Arthur Ripstein, Professor of Law and Philosophy, University of Toronto