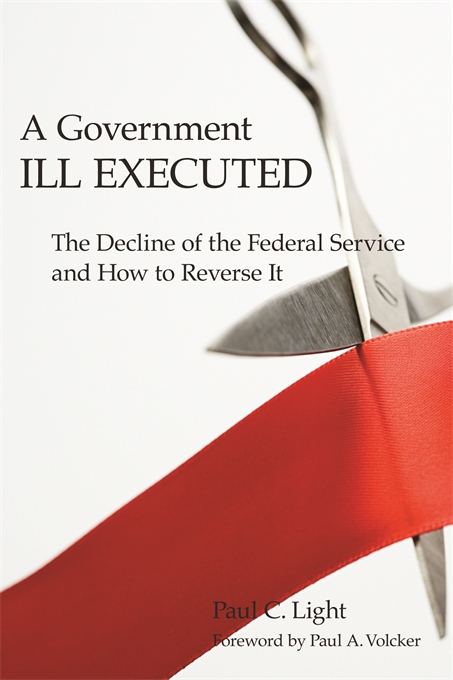 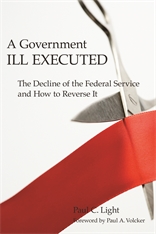 The Decline of the Federal Service and How to Reverse It

Foreword by Paul A. Volcker

“The next administration had best heed Light’s call to focus on getting a coherent, shorter nomination and confirmation process that encourages talented people to sign up for government service.”—Al Kamen, The Washington Post

“The book is A Government Ill Executed. I urge you to read it. It is an important book, and I hope that Senators Obama and McCain are looking at that book as we speak.”—Lou Dobbs, CNN

“Not only the presidential candidates, but everyone running for Congress should read this book. If our political leaders do not confront this pattern of desperate concern, says this sober scholar, ‘they are likely to preside over a string of meltdowns that will make the federal response to Hurricane Katrina look like a minor mistake.’”—Bill Moyers, Bill Moyers Journal

“[A] book that ought to be read by every candidate for federal office this year… [It] goes beyond the complaints to describe what’s happened inside federal agencies to make them less effective.”—The Minneapolis Star-Tribune

“This book provides an important contribution to the literature on federal personnel, and it should be required reading among scholars who study the federal bureaucracy, the U.S. presidency, and public administration.”—A. L. Warber, Choice

“Ever since Hurricane Katrina, we have bemoaned the costs of incompetent government. But Paul Light has done much more: he has focused his enormous energies and brilliant mind on exactly how to create a government that works well. That’s why Light’s voice is so important in our national debate, and why this is such an important book. Whatever your ideology, you need to pay attention to what Light says about how to achieve competence and even excellence in government. The next president needs to read this book, and so do the voters who have a right to expect something better in the coming years.”—E. J. Dionne, Jr., author of Why Americans Hate Politics and Souled Out

“Paul Light has made a major contribution to rethinking federal bureaucracy at a crucial time in its evolution. With the retirement of the baby boom bureaucrats there will be a greater opportunity to rethink and reshape the federal government than at any time since the New Deal. If it is done with the kind of thoughtfulness Light proposes it could profoundly improve the delivery of government services and the quality of the federal work force.”—Newt Gingrich, Former Speaker of the House

“A brilliant and insightful analysis and action plan to make our government work. Bravo!”—Donna Shalala, Former Secretary of Health and Human Services and President of the University of Miami