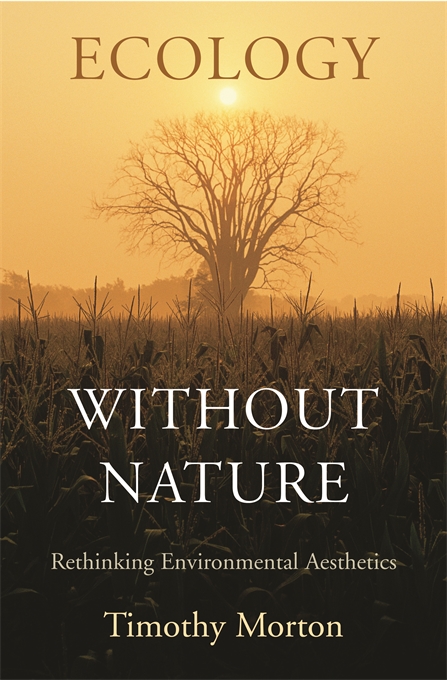 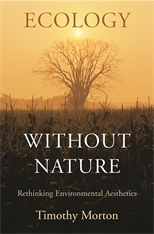 “Ecology Without Nature offers original and important critiques of ecocritical theory, in particular through its analysis of the legacy of Romanticism and the paradox of dualism that pervades much ecological writing. Its occasionally irreverent style and embrace of kitsch make it an enjoyable read, even when the associationist organization and technical terminology require the reader to slow down. However, this slowing down is exactly what Morton recommends for ecocritics as we enter the twenty-first century and the increasingly urgent demands of ‘this poisoned ground’ where Morton calls us to stand.”—Janet Fiskio, Environmental Philosophy

“We’re in the sh**. We have to face it and learn to live with it. That’s a basic idea in dark ecology, which Timothy Morton outlines in his book Ecology Without Nature… Dark ecology has a realistic take on the human state without resorting to false optimism or fatalistic tones of apocalypse. It also requires people to take control, and not lay down in the mud with blind faith of staying above the surface without ever drowning. When we realise our connection to the rest of the world, we understand that our actions reflect all life on the planet… Dark ecology has the potential to be the punk rock or experimental pop of ecological thinking. Or even the death metal, since it shares a goth sensibility that focuses on the dark.”—Kasino A4

“Morton demonstrates that because most ecocriticism assumes nature/environment as a concept, most ecocritics perpetuate the assumptions of the literature that they purport to critique. He argues that nature is an arbitrary rhetorical concept whose modern origins can be traced to Romantics writing during the Industrial Revolution—essentially, that ecocriticism fetishizes ‘nature.’ He contends that a ‘really deep ecology’ would let go of the idea of nature because it marks the difference between ‘us’ and ‘it.’ Drawing on writers from Adorno to Zizek, and considering literature and art from the 18th century to the present, Morton offers a complex, important, and often playful argument that lays the groundwork for new directions in ecocriticism.”—G.D. MacDonald, Choice

“Rigorous and unsettling, Timothy Morton’s book is a vividly realized critique of the political and ethical meanings of ‘place’ and ‘space.’ Steeped in philosophical and literary history, Ecology without Nature is a profoundly convinced and convincing intervention, calling as it does for a more intellectually robust and politically supple environmentalism, one much better suited to the realities of twenty-first-century life. A more thoughtful reflection on the future of dwelling together in a vulnerable world would be hard to find.”—David L. Clark, Professor of English and Cultural Studies, McMaster University