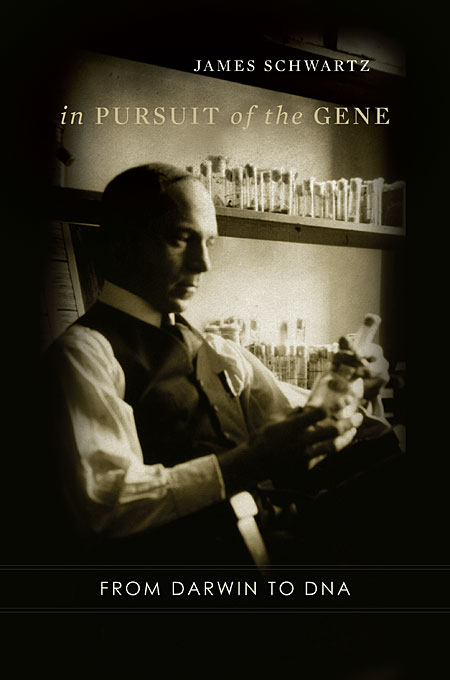 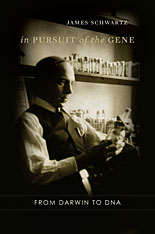 In Pursuit of the Gene

From Darwin to DNA

“What distinguishes Schwartz’s account is his impeccable scholarship, based on many primary sources, and his ability to keep the narrative moving, interweaving discoveries with the strong and eccentric personalities who made them… In Pursuit of the Gene should be required reading for all biologists unfamiliar with the history of genetics. Schwartz shows how quickly science can advance when a group of first-class minds encounters a fertile but unploughed field.”—Jerry A. Coyne, Nature

“Often described as a noble quest for the truth, science can also be messy and duplicitous—never more so, as this book reveals, than in the search for the key to heredity, the gene. Yet rarely has science involved such inspiring and passionate figures—Mendel, Bateson, Morgan, Muller—whose names we may recognize but whose personal tales are relatively little told. Here is the 100-year story of genetics with the setbacks and breakthroughs carefully explained, and the human story—including spells in Soviet prison camps and suicide attempts—thrillingly evoked.”—Rowan Hooper, New Scientist

“Understanding the nature of genetic inheritance was essential for evolution to be accepted as the dominant paradigm in biology. In a masterful work, science writer Schwartz looks at the science and the personalities behind that understanding, ranging from Darwin’s belief in pangenesis to explain the inheritance of physical variations to Hermann Muller’s Nobel Prize–winning work on X-rays and genetic mutation. Although he discusses the contributions of such luminaries as Francis Galton, William Bateson, Gregor Mendel, Hugo de Vries and Thomas Hunt Morgan, Schwartz provides far more than character sketches. In a thoroughly accessible manner, he offers insight into the critical experiments each undertook and allows readers to share the excitement of discovery. He also does a fabulous job of demonstrating the social nature of science, showing how competition often leads to unseemly actions and how the unwillingness to part with a favorite theory leads to an idiosyncratic interpretation of data. Schwartz illustrates how, despite all of this, science continues to make progress and our understanding of the world continues to grow. Although the history of genetics has been covered many times before, Schwartz brings unbridled energy, strong writing and a fresh perspective.”—Publishers Weekly (starred review)

“What makes this account so novel and definitely worth reading is its fine study of character, based primarily on a sensitive reading of original documents. As a result, some of the leading well-known figures in the history of genetics come across in a very different light that leads to a rethinking of existing historical understanding.”—Vassiliki Betty Smocovitis, Journal of Heredity

“In Pursuit of the Gene is a wonderful book, and arrives at just the right time. With genetic discoveries being made on a daily basis, it is critical we understand how current progress in genetics represents a continuation of the century-long search to understand the genetics of complex traits. Schwartz’s book is very important, and deserves a wide readership and attention.”—David Altshuler, Director, Program in Medical and Population Genetics, Broad Institute of Harvard and MIT

“If you have ever wondered what goes on in a genetics lab, here is the answer! In this sparkling and timely book James Schwartz reveals the remarkable history of the gene from its nineteenth-century origins as an entirely imaginary concept to the modern belief that life itself rests in these awe-inspiring combinations of molecules. For at first it was not at all evident that genes might exist—were they real, were they needed, where might they be located? Bit by bit, the concept turned into a reality that came to serve as the foundation stone of the revolutionary new science of genetics. Schwartz writes with wonderful insight about the personalities, rivalries, politics, and obsessions that increasingly drove scientists forward in pursuit of the gene’s identity in research labs and workplaces across the globe. Moving from Charles Darwin and his cousin Francis Galton, who searched fruitlessly for particles carrying inherited traits in domestic animals, through Thomas Hunt Morgan’s famous ‘fly room’ at Columbia University in New York, with grand stories of Morgan’s blatant favoritism and unfinished research projects, on to the race to discover the structure of DNA, the rise of modern genomics, and the recent millennial achievement of mapping our own genome, Schwartz describes the people who made the science of genetics what it is today. Nobel prizes glittered for some, devastating depression for others. Based on original research and unexplored letters and archives, this is a very readable account of science in action. Throughout, there was unstinting commitment to scientific ideals, eloquently reflected in Hermann Muller’s plan to take a suitcase of the latest experimental flies from New York to geneticists isolated in post-revolutionary Russia. This is the story of the rise of big science. But it is also the story of human lives, of men and women engaged in a great combined undertaking that shows the passion and creative artistry that scientists brought to their work. Accurate, lively, and packed full with incident, this book is a triumph of science writing.”—Janet Browne, author of Charles Darwin: Voyaging and Charles Darwin: The Power of Place

“This book is magnificent and captivating in its use of largely unpublished correspondence, largely unpublished, to reveal as a way to see scientists as human beings with feelings, intrigue and emotions riding high. Schwartz gets right into the essentials of the way the gene concept evolved—bit by bit and with a lot of failed ideas along the way. The experiments are handled with superb attention to pertinent detail and to what those experiments revealed. The story builds chapter by chapter as Schwartz’s sleuthing leads the reader to wonder what will happen next as ideas and personalities clash.”—Elof Carlson, Distinguished Teaching Professor Emeritus, Stony Brook University

“In Pursuit of the Gene is far better than anything now in print for the generalist reader. Schwartz knows the literature on the history of genetics well and he is good at explaining what can sometimes be very abstruse scientific arguments clearly. Even the statistical sections are crystal clear. All of this is conveyed to the specialist reader with a light touch—while at the same time managing not to overwhelm the generalist reader.”—Ruth Schwartz Cowan, Janice and Julian Bers Professor, University of Pennsylvania

“This is science for the intelligent general reader as it ought to be written and seldom is: where the scientists are flesh and blood human beings who struggle, fail, compete, rejoice, despair, go down wrong paths and finally stumble, in stages, upon a radically new way of seeing the natural world. A fascinating and readable odyssey that ranges from Texas to Holland to Stalin’s prisons and reminds us how hard-won scientific knowledge is.”—Adam Hochschild, author of Bury the Chains and King Leopold’s Ghost

“Through his careful reading of original sources, many previously ignored or unknown, biologist–mathematician–science writer James Schwartz has produced a superb history of the gene and the chromosomes—from Darwin, Galton, Mendel and the early cell-biologists up to the discovery of the DNA double helix.”—Matthew Meselson, Thomas Dudley Cabot Professor of the Natural Sciences, Harvard University