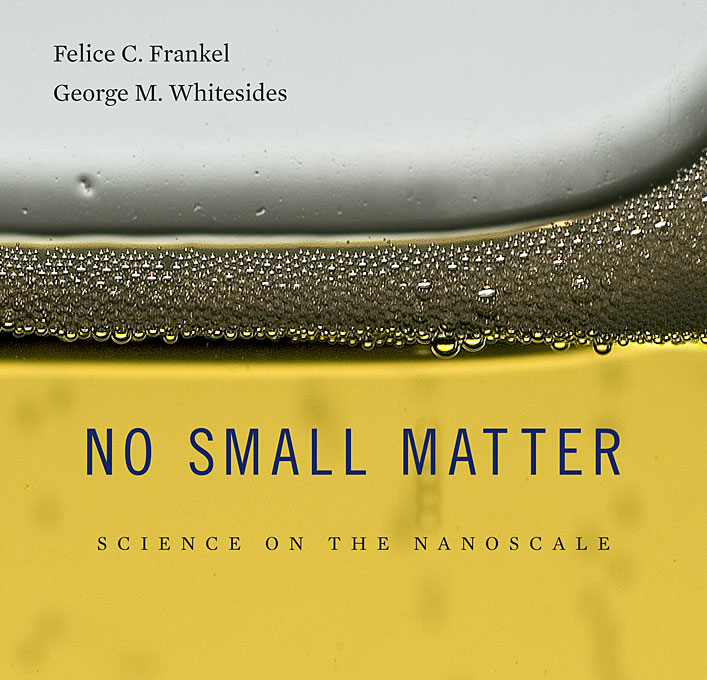 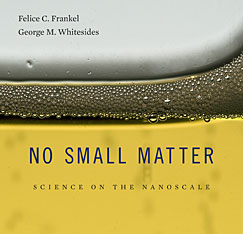 Science on the Nanoscale

“Holy cow! It’s exceptionally rare that science is rendered in such lucid, thoughtful, charming fashion. But I am not sure I’ve ever encountered a beautiful book as important as this one, or vice-versa. ‘Awesome’ is an overused phrase these days, but No Small Matter is exactly, totally, gratifyingly that.”—Kurt Andersen, host of PRI’s Studio 360

“Reorienting our eye to the nanoscale is No Small Matter. This coffee-table book juxtaposes images and ideas to encapsulate the significance of size and shape… Exploring where art meets science, the authors search for promising paths to make small-scale science more intuitive… Frankel and Whitesides’s book adds gravitas and nuance to the popularization of nanotechnology, articulating its interest and vast opportunities.”—Jeremy Baumberg, Nature

“It is hard to grasp what we cannot see, even harder when not even a microscope can see it. With unmatched clarity and arresting elegance, Frankel and Whitesides have designed a narrative and visual voyage into the nanouniverse, revealing its basic constructs without sacrificing its magic.”—Paola Antonelli, Senior Curator of Architecture and Design, MoMA: The Museum of Modern Art

“Whitesides, a professor at Harvard University, is one of the most productive chemists in the world and arguably one of the most inventive. He brings this spirit to the book, an entertaining jaunt through the world of the micro- and nanoscale. The short essays, each dripping with enthusiasm for the topic, are roughly themed around the importance of scientific endeavour on this scale to such areas as medicine, modern computing and the quantum world. It’s not just the text that playfully explores some of the stranger aspects of the invisible world. Frankel’s photography can be equally creative, most obviously in a photo of a quantum apple with a shadow that appears to belong to a cube. The pictures are a mix of traditional photography, CGI and images produced using various microscopic techniques, and are dazzling in the best coffee-table tradition. The text is just as vibrant, which makes cover-to-cover reading a slightly exhausting experience—but worth it when it rewards the reader with such gems as why young children at a party behave like cellular molecules, or how Beethoven had much in common with plants.”—Colin Barras, New Scientist

“A book that’s elegant in appearance, elegant in its images of the nanoworld and elegant in prose.”—Robert Fulford, National Post

“Seemingly invisible objects such as viruses and molecules are imaged in rich detail through high-powered microscopes and photography.”—Science News

“No Small Matter: Science on the Nanoscale by Felice C. Frankel and George M. Whitesides shows a world that is beyond our senses and reality. Through text, beautiful pictures, and illustrations, No Small Matter shows the small and (some of) the large things that we are ignorant about or take for granted.”—Edmond Woychowsky, TechRepublic

“No Small Matter conveys science on the nanoscale through a remarkable series of photographs… This is a brilliant book that will help a wide readership to appreciate the wonders of the very small.”—Andrew Briggs, Times Higher Education

“[Frankel and Whitesides] present a game, insightful attempt to illustrate reality at the very smallest scales, where lengths are measured in billionths of a meter… Frankel’s intricate work reveals a world of unexpected textures and landscapes… This visual and intellectual treat is best absorbed at leisure, with ample time for pondering the new relationships each topic reveals.”—Publishers Weekly

“As modern science has explored the deepest foundations of the physical world, its discoveries have become ever harder to make sense of, ever more remote from everyday life. Yet these same discoveries have transformed our everyday lives, and continue to do so. Felice Frankel and George Whitesides are masters at the art of envisioning the invisible. In this beautiful and beautifully written book, they open our minds’ eyes to the thrillingly enigmatic world that we inhabit, embody, and create.”—Harold McGee, author of On Food and Cooking: The Science and Lore of the Kitchen