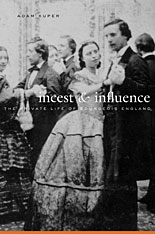 The Private Life of Bourgeois England

Like many gentlemen of his time, Charles Darwin married his first cousin. In fact, marriages between close relatives were commonplace in nineteenth-century England, and Adam Kuper argues that they played a crucial role in the rise of the bourgeoisie.

Incest and Influence shows us just how the political networks of the eighteenth-century aristocracy were succeeded by hundreds of in-married bourgeois clans—in finance and industry, in local and national politics, in the church, and in intellectual life. In a richly detailed narrative, Kuper deploys his expertise as an anthropologist to analyze kin marriages among the Darwins and Wedgwoods, in Quaker and Jewish banking families, and in the Clapham Sect and their descendants over four generations, ending with a revealing account of the Bloomsbury Group, the most eccentric product of English bourgeois endogamy.

These marriage strategies were the staple of novels, and contemporaries were obsessed with them. But there were concerns. Ideas about incest were in flux as theological doctrines were challenged. For forty years Victorian parliaments debated whether a man could marry his deceased wife’s sister. Cousin marriage troubled scientists, including Charles Darwin and his cousin Francis Galton, provoking revolutionary ideas about breeding and heredity.

This groundbreaking study brings out the connection between private lives, public fortunes, and the history of imperial Britain.