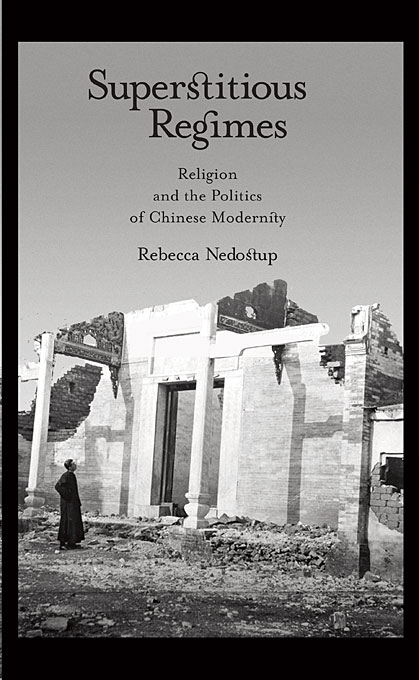 Religion and the Politics of Chinese Modernity

“Nedostup is a historian of modern Chinese politics, particularly of the Kuomintang (KMT); she explores the formation and the effects of the KMT’s religious policies in order to shed new light on processes of state building and social reforms. But, in stark contrast to the many previous historians who have broached such topics in rather naive ways, she has a solid and nuanced understanding of what religion actually was in Republican-period Chinese society and never confuses ideological categories with social practice. She has notably taken stock of the most recent research on Republican-period redemptive societies (by Prasenjit Duara, David Ownby, and David Palmer) and has thus been able to astutely critique the characterizations of such religious groups by politicians. Her work is therefore extremely useful for scholars in the fields of religious studies and political, intellectual, and social history. For this alone, Nedostup’s study is a historiographical milestone that demonstrates that the subject of religion is entering mainstream scholarship on Chinese modern history. That this milestone reflects an impressive command of a staggering body of primary and secondary literature, features sophisticated theorizations, and is rendered in finely crafted prose, speaks further to the importance and desirability of Superstitious Regimes… The state side of the story has been masterfully told by Nedostup, and it is very unlikely that her work will be superseded any time soon.”—Vincent Goossaert, Harvard Journal of Asiatic Studies

“Superstitious Regimes offers a penetrating analysis of the complex confrontation between the Chinese Nationalist regime and the many faces of Chinese religion, largely during the Nanjing Decade… The broad outlines of this struggle are well known, at least to scholars of Chinese religion. Nedostup’s signal contribution is to examine in much greater detail a number of case studies from the Nationalists’ base area in Jiangsu, grounding her work in an impressive variety of legal cases, archival materials, memoirs, newspapers, and magazines. Her efforts on this front are nothing short of herculean… This is a superb study, deserving of wide readership. Its evidence and insights should be incorporated into more general studies of the Republican period, which have tended to treat religion as a side story. For scholars and China-watchers fascinated by the current religious revival in China, this volume is yet another proof that the Communists inherited rather than created their religious problems, and a model of the sort of research we should attempt to carry out in the context of contemporary China. Finally, Superstitious Regimes is a profound reflection on the nature and limits of secularism as part and parcel of the experience of modernity.”—David Ownby, Journal of Asian Studies