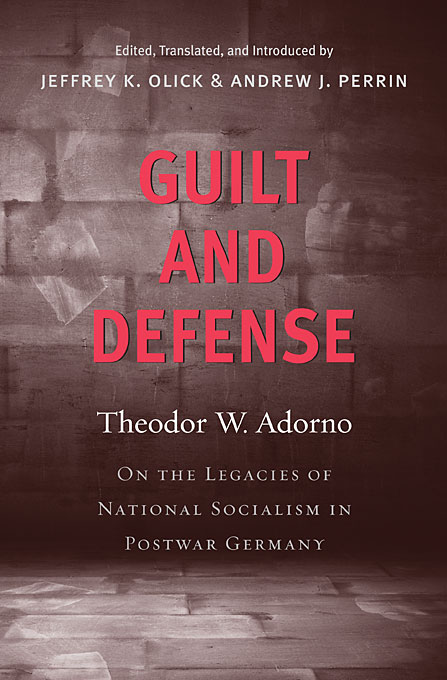 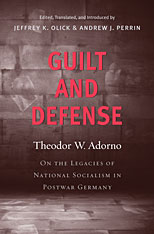 On the Legacies of National Socialism in Postwar Germany

Beginning in 1949, Theodor W. Adorno and other members of the reconstituted Frankfurt Institute for Social Research undertook a massive empirical study of German opinions about the legacies of the Nazis, applying and modifying techniques they had learned during their U.S. exile. They published their results in 1955 as a research monograph edited by Friedrich Pollock. The study’s qualitative results are published here for the first time in English as Guilt and Defense, a psychoanalytically informed analysis of the rhetorical and conceptual mechanisms with which postwar Germans most often denied responsibility for the Nazi past.

In their editorial introduction, Jeffrey K. Olick and Andrew J. Perrin show how Adorno’s famous 1959 essay “The Meaning of Working through the Past” is comprehensible only as a conclusion to his long-standing research and as a reaction to the debate it stirred. This volume also includes a critique by psychologist Peter R. Hoffstäter as well as Adorno’s rejoinder.

This previously little-known debate provides important new perspectives on postwar German political culture, on the dynamics of collective memory, and on Adorno’s intellectual legacies, which have contributed more to empirical social research than has been acknowledged. A companion volume, Group Experiment and Other Writings, will present the first book-length English translation of the Frankfurt Group’s conceptual, methodological, and theoretical innovations in public opinion research.