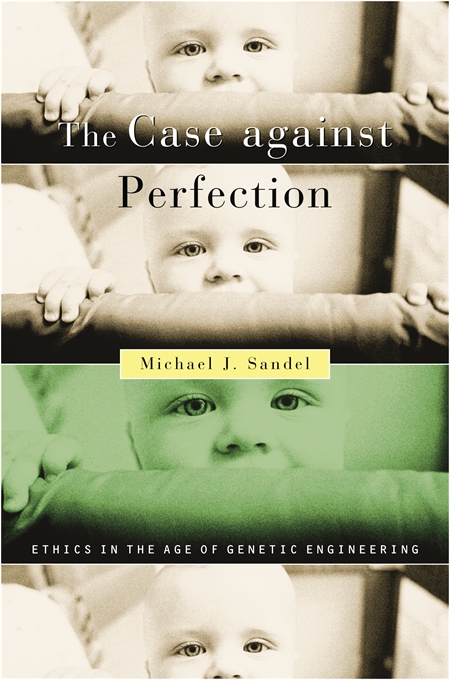 The Case against Perfection

Ethics in the Age of Genetic Engineering

“[A] graceful and intelligent new book.”—Carl Elliott, The New England Journal of Medicine

“Sandel’s arguments ultimately speak to our gut-level qualms about enhancement; and his aim in fact is to give these qualms a coherent moral basis… His book in the end is more a lyrical plea for reverence and humility than a lawyer’s watertight ‘case against.’ …The ethicist Michael Sandel wants us at least to think about the line [between health and enhancement], however imaginary—and to think about where, in a hyper-competitive world, re-engineering our natures will ultimately lead.”—Michele Pridmore-Brown, The Times Literary Supplement

“Michael Sandel‘s dive into the sea of genetic engineering provides a great tasty gulp of contemporary ethical controversy. Quickly read, The Case Against Perfection is nonetheless dense with challenging quandaries, loaded with moral puzzles and filled with facts. An inveterate highlighter, I underlined half the book.”—John F. Kavanaugh, America

“The Case against Perfection by Michael Sandel is a brief, concise, and dazzling argument by one of America’s foremost moral and political thinkers that brings you up to speed on the core ethical issues informing current debates about genetic engineering and stem cell research.”—Gabriel Gbadamosi, BBC Radio

“Anyone who thinks our culture is too competitive and consumer-driven should find that Sandel’s diagnosis resonates. He provides not only a warning about the shape of the future, but equally an indictment of—or at least a call to examine—our individual moral lives and our contemporary social values. Those who support the practice of genetic enhancement argue that the technology is not substantially different from other forms of ‘enhancement’ we use to improve our lives and the lives of our children. Sandel agrees, but he does not base his argument on any particular distinction about the means of enhancement; rather he is deeply concerned about the underlying impetus of mastery and dominion.”—Debra Greenfield, Bioethics Forum

“In the future, genetic manipulation of embryos is expected to have the potential to go beyond the treatment of diseases to improvements: children who are taller, more athletic, and have higher IQs… In The Case against Perfection, Michael Sandel argues that the unease many people feel about such manipulations have a basis in reason… This beautifully crafted little book…quickly and clearly lays out the key issues at stake.”—Gregory M. Lamb, The Christian Science Monitor

“For many years I have been ambivalent about reproductive innovations, from surrogate gestation to preimplantation screening for gender selection. After reading Sandel’s exceedingly elegant little book, The Case Against Perfection: Ethics in the Age of Genetic Engineering, I could finally put satisfactory names to core values implicit in my hesitation: acceptance and solidarity. I encountered Sandel’s book as a participant in the intellectual discourse about parenting. But the book’s greatest value to me was its validation of the commitments of solidarity expressed in my volunteer work on behalf of poor mothers and of acceptance implicit in my determination to mother a child with catastrophic mental illness.”—Anita L. Allen, The Chronicle of Higher Education

“Given the vast gulf between progressive and conservative thinking, the time is ripe for a philosopher to take on the issues of biotechnology. And in The Case against Perfection Harvard’s Michael Sandel does just that, attempting to develop a new position on biotechnology, one that, like Sandel himself, is not easily identified as either left or right. A former member of the President’s Council on Bioethics, Sandel is uniquely well suited for this task, and to challenge the left to get its bearings on the brave new biology… Sandel poses an important challenge to contemporary progressives who have failed to grasp the importance of the emerging biopolitics.”—Jonathan Moreno, Democracy

“[Sandel] makes the compelling case that gentic engineering to gain advantage for ourselves and our children is deeply disempowering, because it turns us away from the communal good, toward self-centered striving.”—Anne Harding, The Lancet

“Nobody’s perfect, and Mr. Sandel’s book makes an instructive and engaging case that that nobody should be.”—Yuval Levin, The New York Sun

“In this short and provocative treatise, Sandel, who is professor of government at Harvard and a member of the President’s Council on Bioethics, takes on the question of why certain kinds of newly available genetic technologies make us uneasy…[his] book reminds us that the proper starting point for bioethics is not, ‘what should we do?’ but rather, ‘what kind of society do we want?’ And ‘what kind of people are we?’”—Faith McLellan, The Scientist

“In a highly readable, wise and little book titled The Case against Perfection: Ethics in the Age of Genetic Engineering, Michael Sandel argues that parents’ quest to create the ideal child reflects a drive for mastery and domination over life.”—Douglas Todd, The Vancouver Sun

“This rather small book presents, in very succinct fashion, many of the arguments against proposals to bioengineer human life. Sandel…argues with care and clarity not only against the more extreme cases such as human cloning, but also against the more modest proposals of gene modification. As the title suggests, the arguments are almost exclusively negative, although Sandel’s most interesting and creative suggestion is the idea that such human bioengineering will cause human beings to lose the sense of life as a ‘gift,’ and that this will have a serious morally negative effect upon the entire social structure.”—P.A. Streveler, Choice

“Sandel explores a paramount question of our era: how to extend the power and promise of biomedical science to overcome debility without compromising our humanity. His arguments are acute and penetrating, melding sound logic with compassion. We emerge from this book feeling edified and inspired.”—Jerome Groopman, Harvard Medical School, author of How Doctors Think

“We live in a world, says Michael Sandel, where ‘science moves faster than moral understanding.’ But thanks to Sandel, moral understanding is catching up. Cloning, stem cell research, performance-enhancing drugs, pills that make you stronger or taller: if some scientific development bothers you, but you can’t explain why, Michael Sandel will help you to figure out why you’re troubled. And then he’ll tell you whether you should be.”—Michael Kinsley