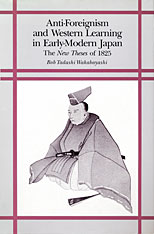 This study analyzes New Theses (Shinron) by Aizawa Seishisai (1781–1863) and its contribution to Japanese political thought and policy during the early–modern era. New Theses is found to be indispensable to our understanding of Japan’s transformation from a feudal to a modern state.

Focusing on Aizawa, Bob Wakabayashi traces the development of xenophobia during the Tokugawa period and examines the basis of anti-Western sentiment. He shows how knowledge of Christianity inspired Aizawa to develop the potent concept of kokutai (“what is essential to a nation”). His analysis explains why the Edobakufu’s policies of national isolation (sakoku) and armed expulsion of Westerners (jōi) gained widespread support in the late Tokugawa. Wakabayashi also describes how information on Western affairs and world conditions decisively altered Tokugawa Confucian conceptions of civilization and barbarism, and how this in turn enabled the Japanese to redefine their nation’s relationship to China and the West.

Rather than place Aizawa and his New Theses of 1825 at the beginning of a process leading up to the Meiji Restoration, Wakabayashi discusses New Theses in conjunction with the bakufu’s Expulsion Edict issued in the same year. He concludes that the convergence of the two events in 1825 marks the emergence of modern nationalism in Japan, and therefore should perhaps be seen as more epoch–making than the 1868 Restoration itself.

The study also presents a complete translation of New Theses.