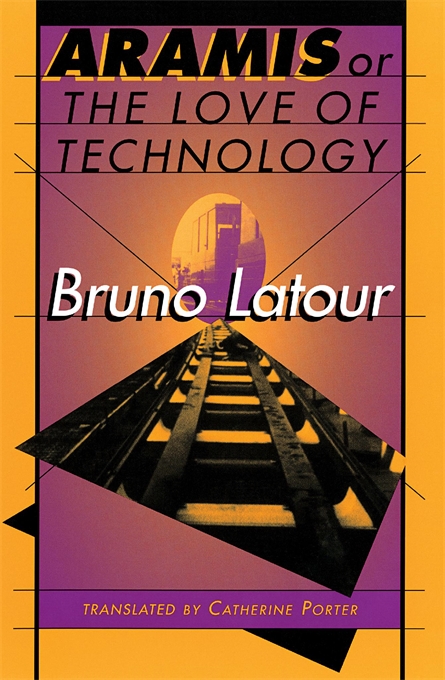 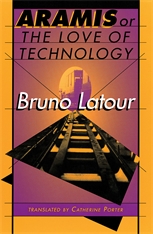 Aramis, or The Love of Technology

“It is [the] world of machines that Latour sets out to rehabilitate in his clever new work…an eminently readable book—even on occasions a ripping good yarn. This time round, the author of such seminal sociology of science texts as We Have Never Been Modern has set out to do something daring: create a new genre, what he calls ‘scientifiction’… The result is a hypertext, weaving real and fictional characters together against the backdrop of an actual project carried out by RATP, the public transport authority for Paris… [A] feisty sociotechnological whodunit.”—Margaret Wertheim, New Scientist

“Relationalists have to insist that made–found is as dubious as the value–fact and subject–object distinctions. This claim is not easy to make plausible, but Latour is very good at doing so. He is perhaps the best contemporary exponent of the philosophy of interchanges, of continuous passages across traditional dualisms and traditional disciplinary borders. This is because he combines philosophical sophistication with genuine delight in empirical fieldwork, a fluent and flexible style, an amazingly wide range of reference, and wit. Aramis is often hilarious. In Catherine Porter’s splendidly vigorous and idiomatic translation, it is a good read, a well-paced narrative of instructive events. Any policy maker who contemplates spending public money on technological innovation should read it before signing his or her first contractual agreement. It should also be read by anybody looking for some genuinely fresh philosophical ideas.”—Richard Rorty, Voice Literary Supplement

“Mr. Latour, a French sociologist of science, is quite serious…about what he is creating—a new genre of fiction and reality that tells a larger truth… [The Aramis project] may have been a wild goose chase, but some honkers end up in the oven. Aramis, or The Love of Technology, in this translation by Catherine Porter, comes out the way a game bird should, au point, juicy and delicious.”—M. R. Montgomery, New York Times Book Review

“Immediately after the project ended, Bruno Latour was asked by the RATP to investigate what went wrong. On the basis of a detailed empirical study, he has written three books in one: a detective novel, in which a sociology professor and a young engineer play the parts of Sherlock Holmes and Dr. Watson; a scholarly treatise introducing the modern sociology of technology; and a reproduction of original archival documents. As the book develops, we hear the voice of technology itself, with Frankenstein’s ‘humachine’ and Aramis himself as spokespersons… Latour’s book does offer important insights into the sociotechnical domain and engineering practices that transcend the Aramis case. It also provides, mainly in the form of methodological discussions, the groundwork for a theory of technology and society. This [is an] important asset, of what I think is Latour’s best book so far.”—Wiebe E. Bijker, Nature

“Aramis shows with wonderful clarity the many different stories which were told about all aspects of Aramis.”—David Edgerton, Times Literary Supplement

“Aramis…uncovers the limits of sociology in its failure to recognize our essentially social relationship with technical artifacts. Its critical force comes from using ethnography to enable technology to speak, or rather, by allowing us to hear the voice of technology speaking indirectly through administrative documents, political rhetoric, engineering specifications, business plans, fiction, and philosophy.”—Peter Lyman, Contemporary Sociology

“Aramis is a case study, a sociological investigation, and, yes, a detective novel unlike any ever written—a carefully constructed, non-fictional narrative of the negotiated fictions that underwrite our mechanical inventions. Latour, one of the most supple and rewarding practitioners of any science, shows that the construction of technological society is at base a human drama and must be told in a commensurate manner. Here at last is science studies that avoids self-exemption and partakes, with humor and emotion, of the very processes it depicts. Aramis is a strange but deep book that comes to counterintuitive, urgent conclusions, pleading for more successful parlay between technology and humanism, animate and inanimate, body and soul. This story has much to say about the world we want to build, the world we think we are building, and the worlds we have failed to pull off.”—Richard Powers, author of Galatea 2.2