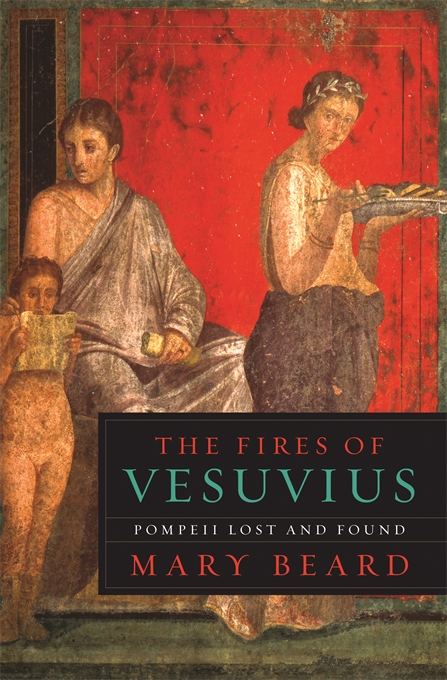 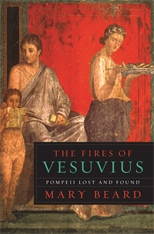 The Fires of Vesuvius

“Engrossingly mischievous… Beard takes cheeky, undisguised delight in puncturing the many fantasies and misconceptions that have grown up around Pompeii—sown over the years by archaeologists and classicists no less than Victorian novelists and makers of ‘sword and sandal’ film extravaganzas. While many scholars build careers through increasingly elaborate reconstructions of the ancient world, Beard consistently stresses the limits of our knowledge, the precariousness of our constructs and the ambiguity or contradiction inherent in many of our sources. ‘There is hardly a shred of evidence for any of it’ serves as her battle cry, and it’s a noble one… This is a wonderful book, for the impressive depth of information it comfortably embraces, for its easygoing erudition and, not least, for its chatty, personable style.”—Steve Coates, New York Times Book Review

“[The Fires of Vesuvius] offered me a wealth of riveting information on the vanished city, written with clarity, wit and a detective’s eye for solving conundrums.”—Alberto Manguel, Times Literary Supplement

“Doing her level best to unpack the ‘Pompeii paradox’—how ‘we simultaneously know a huge amount and very little about ancient life’ in Rome’s foremost ruin, the seaside city wholly consumed by a vomitous Vesuvius in 79 A.D.—Beard, the subversive and spiky Cambridge classicist, leaves few forensic (or semiotic) stones unturned. Alternately recreating daily life and picking, brick by symbolic brick, at the abundant archaeological and psychological detritus, she proceeds to exhume, analyze, and reconstitute the time and place in a manner pleasing to traditionalists, revisionists, and inevitabilists alike.”—The Atlantic

“As Mary Beard shows in The Fires of Vesuvius, her marvelous excavation of Pompeii’s history, the city is rarely what it is billed to be. A leading historian of Roman culture, a prolific essayist and an irrepressible blogger, Beard punctures conventional pieties about history and culture with formidable scholarly authority, always paying keen attention to the layering effects of the passage of time… With The Fires of Vesuvius, Beard has produced a lusciously detailed, erudite account of life in ancient Pompeii… The challenge of The Fires of Vesuvius rests in the way that its portrait of Pompeii overturns longstanding conceptions about the empire to which the city belonged. Most important is Beard’s depiction of the chaotic diversity of Pompeian life—the sheer variety of its religious experience, its linguistic multiplicity, its class tensions—which raises far-reaching questions about the nature of cultural and political identity in the imperial Roman context… With its focus on labor, education and religion, The Fires of Vesuvius is a testament to how much Roman studies has to offer the contemporary political imagination. Well-informed in the latest research in demography, the history of Roman politics, architecture, ancient economics, feminist and post-colonial studies, Beard probes the experience of men and women, free and slave, rich and poor… The point that permeates Beard’s work, along with much of the best of classical cultural and literary studies, is that part of the job of studying the past is to examine the assumptions of each storyteller and the effect each of their stories has, ripple-like, on the rest. Beard’s depiction of Pompeii manages to do justice to all its alien strangeness while prompting us to reflect on the significance of felt resemblances between its experience and our own—in the formation of cultural identity, habits of consumption, political nepotism, religion, sexuality, violent entertainments and much more.”—Joy Connolly, The Nation

“It is the long vanished life of Pompeii that Mary Beard evokes in all its detail and complexity in her new book… She gives us Pompeii itself, with its smells and swill, its sex and superstition, its poverty and pathos. It is a wholly successful evocation, pieced together from a deep knowledge of a frighteningly large bibliography.”—G. W. Bowersock, New Republic

“[A] wry, recondite and colorful story of what is known and what is conjectured about life in Pompeii before the fall… Like a canny cook making a banquet from scant means, Beard creates a living Pompeii for the reader from the hard evidence at her disposal. Though she is a skeptic, never pretending to ingredients she doesn’t have in her larder, she knows how to take the gaudy razzmatazz of a building’s facade or the messy amalgam of workaday shops jumbled with mansions, and make them do a little singing for the reader… This is a lively piece of work, with an easy familiarity and obvious pleasure in the subject, wearing its knowledge lightly, and not above some mischievous poking at Pompeii’s many controversies.”—Peter Lewis, San Francisco Chronicle

“In this lively survey, Beard, a classicist at Cambridge, tempers erudition with a skepticism toward interpretive overreach. ‘To be honest, this is all completely baffling,’ she remarks about a painting dense with iconography. Archeological reasoning is often ingeniously indirect—ragged drips suggest a bucket knocked from a platform by painters fleeing the volcano—and Beard’s caution makes her an excellent guide for nonspecialists, as she explains both what we know and how we know it with equal clarity.”—New Yorker

“In a survey that encompasses Pompeians’ religion, diet, and even traffic patterns, Beard sets out to correct many of the misimpressions that countless guidebooks—and guides—have foisted on tourists… More than two centuries of tourism and excavation have left a legacy of assumptions that cloud our understanding of the site—and, since Pompeii contains some of the best evidence about daily life in the Roman world, about Rome itself. The Fires of Vesuvius lays out decades of specialist debate in clear, reader-friendly prose.”—Andrew Curry, Wilson Quarterly

“In The Fires of Vesuvius: Pompeii Lost and Found Mary Beard cheerfully dismantles as many assumptions about what we are looking at in the city’s remains as she constructs hypotheses. She shows conclusively that the city was not entirely taken unawares by the eruption.”—Katherine A. Powers, Boston Globe

“In The Fires of Vesuvius, Cambridge University classics professor Mary Beard restores Pompeii in all its bustling everydayness… But as vivid and detailed a depiction as Beard is able to provide, what is equally fascinating about Pompeii is how much we do not know… Beard calls this the ‘Pompeii paradox,’ the fact that ‘we simultaneously know a huge amount and very little about life there.’ That’s also what makes this learned but lively account a rather haunting read. Oddly familiar images of daily life two millenniums distant are juxtaposed with a sense of impenetrable mystery. ‘A visit to Pompeii almost never disappoints,’ Beard insists. To read this book is to agree.”—Marjorie Kehe, Christian Science Monitor

“In the The Fires of Vesuvius, [Beard] gives us a wonderfully comprehensive picture of the city that has long fascinated historians, archaeologists and classicists… For a historian such as Beard, drawing on the latest archaeological findings, it is possible to write with authority how people of the first century ate their meals and lighted their homes, earned a living, governed themselves and attended to their bodily needs. For her—as she shows in this book—Pompeii is not a dead but a living city.”—David Walton, Milwaukee Journal-Sentinel

“Pompeii may still confuse and challenge, but Beard’s informative reappraisal vividly evokes the way it was. And travelers will welcome her practical advice on making a visit.”—Judith Chettle, Richmond Times-Dispatch

“In a grand synthesis, one of our most distinguished classicists relates all that we know—and don’t know—about ancient Pompeii, devastated by a flood of lava and volcanic ash from Mt. Vesuvius in A.D. 79. Beard splendidly recreates the life and times of Pompeii in a work that is part archeology and part history. She examines the full scope of life, from houses, occupations, government, food and wine to sex, and the baths, recreation and religion… Beard’s tour de force takes the study of ancient history to a new level.”—Publishers Weekly (starred review)