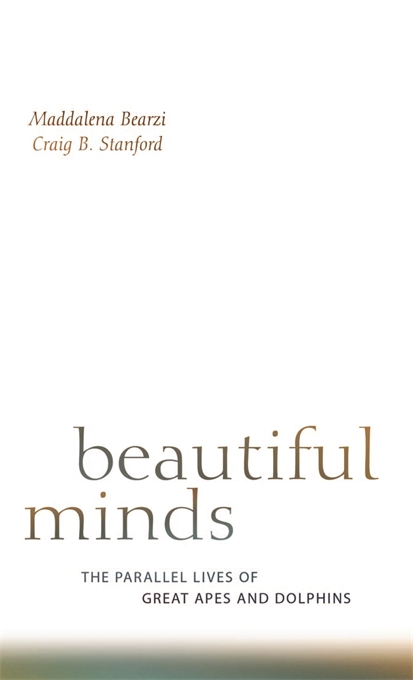 The Parallel Lives of Great Apes and Dolphins

“Delightful… By the time I reached the final chapter of Beautiful Minds I was so charmed that I felt compelled to read on. Bearzi and Stanford’s book has the capacity to delight, entertain, educate, evoke compassion and, I hope, galvanize people into action.”—Debbie Custance, The Times Higher Education Supplement

“Dolphin specialist Bearzi and primatologist Stanford team up in this discussion of the qualities of two species of mammal endowed with remarkably large brains. Among explications of the cultures, politics and emotion of the animals, the authors also make a resounding plea for conserving the ecosystems of these complex creatures.”—Elizabeth Abbott, The Globe and Mail

“To see the world from someone else’s point of view is hard enough but how much harder when that viewpoint is that of a marine dweller with flippers or an ape whose cognition is based on leaf-centered survival in a rainforest? Hand-signed chimp communications and distinguishing imitation from emulation are two of the topics covered here, the first book to investigate the lives of the dolphins and apes in parallel. It explains why both have big brains and, as far as possible, what is must be like to be them. Fascinating.”—Adrian Barnett, New Scientist

“Endowed through evolution with large brains, the great apes (chimpanzees, bonobos, gorillas, and orangutans) and the cetaceans (dolphins and whales) are second only to humans in intelligence. In this delightful and intriguing book, dolphin specialist Bearzi and primatologist Stanford discuss the similarities between these groups. Both use tools, have sophisticated means of communication and cooperation, solve problems innovatively, transmit cultural traditions to the next generation and are able to imitate others. Like humans, apes and dolphins form complex social networks, and they are capable of deception and manipulation.”—Publishers Weekly