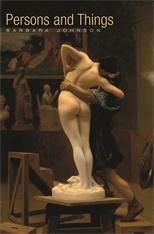 Moving effortlessly between symbolist poetry and Barbie dolls, artificial intelligence and Kleist, Kant, and Winnicott, Barbara Johnson not only clarifies psychological and social dynamics; she also re-dramatizes the work of important tropes—without ever losing sight of the ethical imperative with which she begins: the need to treat persons as persons.

In Persons and Things, Johnson turns deconstruction around to make a fundamental contribution to the new aesthetics. She begins with the most elementary thing we know: deconstruction calls attention to gaps and reveals that their claims upon us are fraudulent. Johnson revolutionizes the method by showing that the inanimate thing exposed as a delusion is central to fantasy life, that fantasy life, however deluded, should be taken seriously, and that although a work of art “is formed around something missing,” this “void is its vanishing point, not its essence.” She shows deftly and delicately that the void inside Keats’s urn, Heidegger’s jug, or Wallace Stevens’s jar forms the center around which we tend to organize our worlds.

The new aesthetics should restore fluidities between persons and things. In pursuing it, Johnson calls upon Ovid, Keats, Poe, Plath, and others who have inhabited this in-between space. The entire process operates via a subtlety that only a critic of Johnson’s caliber could reveal to us.