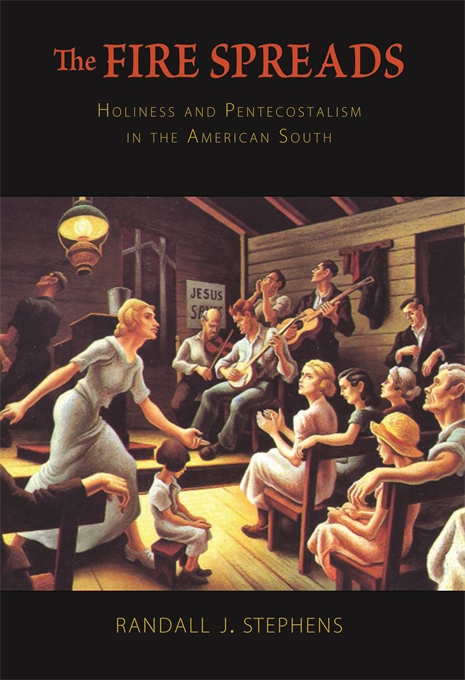 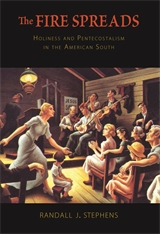 Holiness and Pentecostalism in the American South

“Stephens’s masterful account of how the South nurtured and altered a once-marginalized religious movement—and how that religion influenced the region—is the most fluent and authoritative synthesis of a complex and controversial subject.”—The Atlantic

“In The Fire Spreads Randall J. Stephens gives a historical account of the genesis of Pentecostalism in the USA, which treads delicately through the contradictions. He provides a strikingly imaginative account of riotous religious competition, above all in the American South.”—David Martin, The Times Literary Supplement

“Boisterous Pentecostal worship has excited the scorn of skeptics, while apocalyptic Pentecostal theology has scandalized the orthodox. But Stephens limns a pattern of phenomenal growth for this revolutionary faith, now curiously central to the conservatism of the Religious Right. A balanced work of cultural scholarship.”—Bryce Christensen, Booklist

“Crisply written, analytically clear, and full of colorful personalities, The Fire Spreads is the most significant study of Pentecostal origins since Grant Wacker’s Heaven Below… Randall Stephens offers a rich portrait of Christians in the American South who embraced perfectionist teachings. Mining untapped pamphlets, periodicals, diaries, and church records, he presents a lucid chronological and regional study of the holiness and Pentecostal movements that eventually dominated the national perception of southern religion. Himself the grandson of a ‘barnstorming holiness preacher,’ Stephens chronicles the many ironies that led to this unexpected triumph.”—John G. Turner, Books & Culture

“The growth of the holiness and Pentecostal movements in the late-19th and early-20th-century South is the focus of this engaging work, the most extensive such treatment to date.”—W.B. Bedford, Choice

“In The Fire Spreads Randall Stephens puts the Pentecostal tradition in the South in a broad historical perspective in a masterfully researched and well-written book.”—Hans Krabbendam, Church History and Religious Culture

“This study is an important addition to the growing field of pentecostal studies. Stephens’s emphasis on regional identity complements the previous works of historians like Grant Wacker and Edith Blumhofer. His ability to make sense of the complex theological features of pentecostalism makes The Fire Spreads accessible to a wide audience composed of lay adult readers, college students, pentecostal practitioners, and professional historians. Furthermore, there is something to be said for a book that is both deeply intelligent and highly readable… Anyone interested in the history of religion in the United States—and specifically as it relates to region, race, and politics—must read Stephens’s The Fire Spreads.”—Michael Pasquier, H-Pentecostalism

“In this careful and detailed study, Stephens chronicles the rise of Holiness and Pentecostal movements in the American South in the late 19th century, discusses their eventual split and quarrels about theology and culture, and then recounts the gradual mainstreaming of both movements in the late 20th century.”—Publishers Weekly

“Stephens reveals the Pentecostal and Holiness movement’s ‘restless visionaries’ to be complicated religious figures pressing at the margins of southern society, undeterred by frequent scandals and internecine disputes, traveling constantly, delighting in acts of persecution, and testing the boundaries of religious ecstasies. An essential book for anyone interested in twentieth-century religious history.”—Paul Harvey, University of Colorado at Colorado Springs

“One of the few essential books about American Holiness and Pentecostal religion. Randall Stephens explains the nineteenth-century northern roots of southern Pentecostalism and displays the growth, creativity, and arguments of the various Pentecostal groups in the twentieth-century south.”—Ted Ownby, University of Mississippi

“A classic study of the first region in the world where Pentecostalism took root as a mass movement. Excellent and readable. I highly recommend it.”—Vinson Synan, author of The Holiness/Pentecostal Movement in the United States