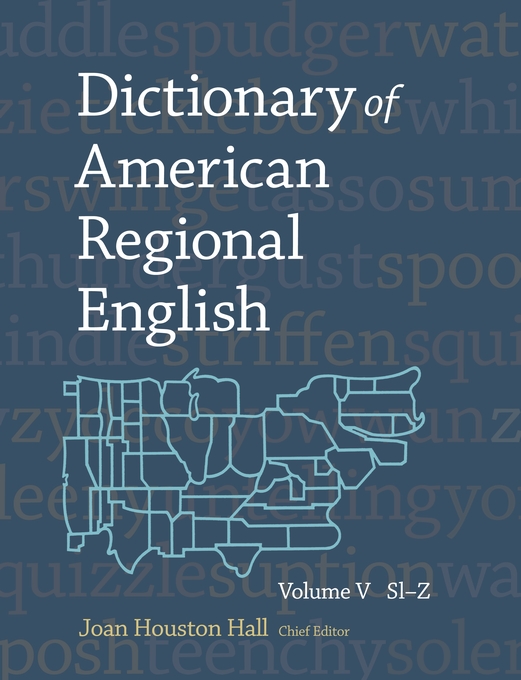 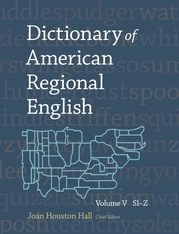 “‘Aaron’s rod’ to ‘zydeco’—between these two verbal bookends lies an immense and largely hidden American vocabulary, one that surely, more than perhaps any other aspect of society, reveals the wonderfully chaotic pluribus out of which two centuries of commerce and convention have forged the duller reality of the unum… A monument, a memorial, a piece of work both magisterial and majestic that someone, somewhere, was one day bound to undertake. So to all who take pleasure from the complex mechanics of human communication: let us rejoice that someone did indeed undertake this gigantic task, and recorded so fascinating a morsel of American linguistic history.”—Simon Winchester, Lapham’s Quarterly

“The true value of DARE is as a record of the down-home speech of Americans, reflecting quotidian concerns: children’s games, plants and animals, good things to eat and ways to talk about our neighbors—the kinds of things too easily forgotten… Although we often assume that ‘country practices’ have fallen by the wayside under the onslaught of pop culture, DARE provides evidence for many terms not only of past use but of continued currency.”—Erin McKean, The Wall Street Journal

“DARE devotes as little space as possible to standard words with standard meanings. It doesn’t cover ‘technical, scientific, or other learned words or phrases.’ Nor does it take any particular interest in the kinds of words that appear in dictionaries of slang or on Urbandictionary.com. What’s left? A vast, meticulously researched and organized compilation of the nonstandard words, spellings, and pronunciations that dictionaries generally leave out—American regional English… The DARE alphabet is at last complete. Now forensic linguists can look up zaguan (‘A vestibule; a porch’). Environmental lawyers can look up zanjero (‘The people who take care of or open the floodgates into the ditch’). And so can anyone who needs or wants a fuller picture of American English.”—Barbara Wallraff, American Scholar

“The native words we know for things sound right when we hear them, reminding us who we are and where we come from. That is one more reason to celebrate the Dictionary of American Regional English, which reminds us that we have continued to name things long after Adam, and which lovingly and indefatigably catalogues the words that place us in the world.”—John E. McIntyre, The Baltimore Sun

“For scholars of American English, this volume and the series it completes are a hoard of riches, and also a work of heroic proportions for more than four decades… For the non-specialist reader… browsing is an endless delight… What strikes one repeatedly is the variety, the creativity, and the colorfulness of the American English. This final volume alone has more than 1,200 double-column pages, and every one I have looked at so far has some fresh piece of information (sushi has been known in American English since 1894) or evocative term (swing-dingle, a shoulder yoke for carrying two buckets). This volume, this project is more than a mere reference for looking up obscure terms. It is a repository of who we have been as a people, and who we are.”—John McIntyre, The Baltimore Sun blog You Don’t Say

“DARE is evidence that American speech will never become stale and fusty, that the great linguistic homogenization of television is a myth.”—Henry Kisor, The Chicago Sun-Times

“A reference tool of the finest kind.”—Down East

“The Dictionary of American Regional English covers regional and local speech for the whole United States: It is the treasure-house for the all-American word hoard… Touring the Dictionary of American Regional English is a road trip of the mind from sea to shining sea… Its approach has been unusually adventurous. It speaks with authority about American regional speech and has also captured the popular imagination. It is a peerless resource for scholars, but at the same time delivers accurate information about regional vocabulary to laypersons who, until DARE, could not count on access to it. In the twentieth century, DARE was so far ahead of practices in both dialectology and lexicography that it sometimes seemed futuristic… DARE entries have a homespun texture, demanding more of a reader, who must reconcile various types of information in order to understand what DARE has to say about a word or phrase. But if they pay attention, readers come away marvelously informed… DARE is a bold synthesis of linguistic atlas and historical dictionary… Scholars of American language, history, and culture will rely on it, and they will enjoy it as much as lay readers. DARE teaches us about American regional speech, of course. It also teaches us to think big, put aside assumptions, draw on traditions when useful, and make things new.”—Michael Adams, Humanities

“To scholars and language lovers [the Dictionary of American Regional English] is an invaluable guide to the way Americans not only speak but also live—a homegrown answer to the Oxford English Dictionary… From the beginning the dictionary was the product of cutting-edge lexicographical science and on-the-ground research of unprecedented scope… Over the years DARE has been consulted by Broadway dialect coaches, detectives analyzing ransom notes, scholars puzzling over a Eudora Welty reference to ‘piecing’ (that is, snacking) and poets looking to mine its 170-plus synonyms for dust bunnies.”—Jennifer Schuessler, The New York Times

“An important event in lexicography.”—Joan Acocella, The New Yorker

“If you’re the kind of person who is delighted to stumble across one strange new word in a book, you may find reading this enormous volume to be an almost excessive pleasure…The Dictionary is a book you can actually sit down and read—not just for colorful words and quotations, but also for a tour of actions, objects, creatures and categories central to far-off or vanished pockets of American life… Without your own team of roaming lexicographers, there is probably no easier way to browse America’s past ways of living and talking than to read its books. But Dictionary of American Regional English gathers all these terms into one place, together with samples of the voices and stories and songs that gave rise to them. It’s the rare American book whose roots extend not just to one region but to all of them.”—Amanda Katz, NPR.org

“Fifty years ago, scholars at the University of Wisconsin–Madison set out to document the regional speech of the United States. They interviewed people one-on-one. They read cookbooks, poems, newspapers and novels. This week, the fifth and last volume of the Dictionary of American Regional English was published, making it the most exhaustive record available of American speech.”—Jacqueline Trescott, The Washington Post online

“This is a monumental achievement, nothing less than a comprehensive account of the ever-expanding ways we talk to each other. Up above, Noah Webster and Mark Twain are smiling.”—Joseph J. Ellis, Mount Holyoke College

“The Dictionary of American Regional English is an essential resource for the English language and its rich expression in America. From Mark Twain to William Faulkner, our great writers have anchored their work in regional English with its deep ties to the places in which Americans live. With the publication of this magnificent [final] volume, we can now fully understand and embrace the voice of our nation.”—William Ferris, University of North Carolina at Chapel Hill

“The Dictionary will rank as one of the glories of contemporary American scholarship…it is endlessly rewarding to dip into, and if you look up a particular word or phrase you are in constant danger of being seduced to something else… It is a work to consult, and a work to savor—a work to last a lifetime.”—John Gross, The New York Times

“The Dictionary of American Regional English…is all we had hoped for and more. It includes the regional and folk language, past and present, of the old and the young, men and women, white and black, the rural and the urban, from all walks of life… This is an exciting, lasting work of useful scholarship accomplished with excellence, a work that scholars and laypeople alike will study, use and enjoy for generations.”—Stuart B. Flexner, The New York Times Book Review

“A testimonial to the metaphor-making power of the American language at its most vigorous.”—Newsweek

“To open its pages is to thrill at the exploration of the New World and to trace the course of American history through its language… Its editors…have caught the native poetry of America on every page.”—Smithsonian

“Unmatched as a kind of refuge for colloquialisms threatened with extinction… Writers, etymologists and other devotees of verbal arcana have never been given a richer browsing ground.”—Ezra Bowden, Time