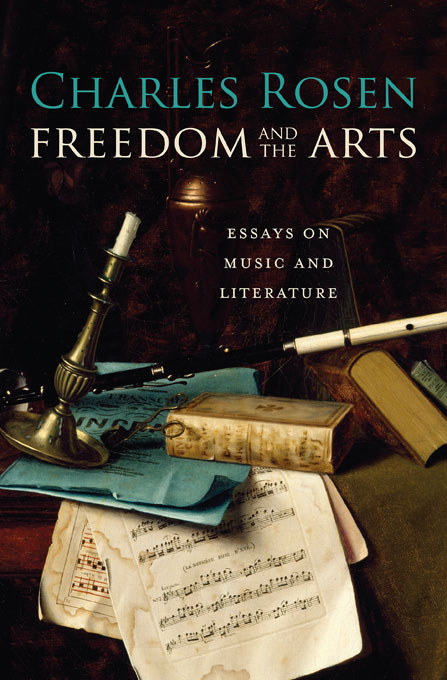 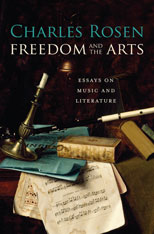 Freedom and the Arts

Essays on Music and Literature

“Even those of us who admire Charles Rosen as the most remarkable critic writing today must be startled by the polymathy in his new collection, Freedom and the Arts… Just to see the spectrum provided by [his essays’] titles is to marvel: ‘Structural Dissonance and the Classical Sonata,’ ‘Theodore Adorno: Criticism as Cultural Nostalgia,’ ‘Lost Chords and the Golden Age of Pianism,’ ‘La Fontaine: The Ethical Power of Style,’ ‘Hofmannsthal and Radical Modernism.’ To read them is to marvel further: Rosen’s communicative power is as prodigious as his versatility. Each essay includes so much more than its specific topic. Large-mindedness matters more here than scholarship; cleverness is simply incidental… No other living critic has produced a corpus that so fully exemplifies the virtues and achievements of civilization. It’s easy to believe that we will need to keep revisiting Freedom and the Arts. As I turn in these pages from bygone traditions of dislocation (also known as asynchronization or limping) in piano playing to the connections between cruelty and eroticism in the Marquis de Sade, and from the sound patterns in La Fontaine’s poetry to the skill of Niccolò Jommelli’s setting of recitative secco in his opera Olimpiade, I can’t help laughing in amazement. Who else in the world could make all these things lucid, sensuous, and important? … We return to Rosen not to remind ourselves of his greatness but to come to a better understanding of Mozart’s and Mallarmé’s, to enrich our appetites for classicism, Romanticism, and modernism, and to deepen our love of music, literature, and civilization. Despite the casual disdain he often expresses for fools, his primary task is always to write about the art in which he takes pleasure.”—Alastair Macaulay, The New York Review of Books

“You can get lost in the world of Charles Rosen. He’s quite possibly the richest cultural critic writing today in the vastness of what he offers… As a formidable pianist and a professor emeritus of music at the University of Chicago, his principal jumping off point is, of course, music. But once he jumps, he lands into psychology, literature, science, philosophy, art—everything that’s in the primordial humanities brew… He deals in mountains of knowledge, and he covers more ground with that knowledge than anyone writing today. The title of this collection does not lie: the power he imparts on you the reader will set you free.”—Jimmy So, The Daily Beast

“[A] brilliant collection of essays… Whenever I read Rosen’s work, I think of all the dim space in my brain that is occupied irreparably by old ‘Brady Bunch’ episodes and the sexual politics of ‘Three’s Company’; in Rosen’s brain these areas are occupied by Montaigne, the complete works of Congreve, rival translations of Rimbaud, etc. etc. He bestrides culture.”—Jeremy Denk, The New Yorker

“For Rosen, greater knowledge always brings greater pleasure… When discussing pieces of music in Freedom and the Arts, he frequently illustrates his arguments by reproducing passages from their scores. He quotes poetry in French and German, but he does provide translations (often his own). In short, he expects his readership to be as cultivated as he is. It is a great compliment, as well as a shrewd pedagogical device. One finishes any book by Charles Rosen intellectually re-energized, eager to become a deeper reader, a more attentive museumgoer, a better listener.”—Michael Dirda, The Washington Post

“Which critic could offer a witty defense of the Marquis de Sade’s sadomasochistic writings, muse on why gays love Maria Callas and give a subtle analysis of ‘Structural Dissonance and the Classical Sonata,’ complete with generous musical examples? Only one: Charles Rosen. All these topics and many more appear in this brilliant, amusing and often moving volume of essays. The word polymath is overused, but Rosen is one writer who surely deserves the epithet. The whole of Western culture seems to lie stored behind his domed forehead, allied to a penetrating intelligence that makes critical adversaries quail… The thread running through [the essays] is the liberating power of great art and literature… [One] can simply enjoy this wonderful book, both for its glittering surface and its hidden depths.”—Ivan Hewett, The Daily Telegraph

“[Rosen] is a writer who can write… One is reminded that Rosen is more than a musicologist. Not only is he a pianist, having recorded works from Bach to Boulez, but he also surveys with enthusiastic erudition a number of literary topics… The reader may rest assured of recommendation. If you know Rosen’s work, you will doubtless require no urging; if not, then this is a good place to start.”—Mark Berry, Times Higher Education

“Offers clear evidence of Rosen’s gifts as musical and cultural analyst… Many of the most compelling pages here reflect his profound understanding of, and insights into, writers as disparate as Diderot and Mallarmé, periods ranging from the reign of Louis XIV to the Second Empire, and digressions that include, say, tedium, boredom, and ennui as ‘one of the great literary subjects after 1700, particularly in France.’ …Rosen packs more detail and insights into nine pages than most critics could manage in a study ten times that length.”—Michael Morley, Australian Book Review

“Charles Rosen has always written from a height in the Earth’s atmosphere at which the gas exchange is not the same as it is for most regular folk. That’s the edification, fun, exasperation—and chill—of reading him. The latest collection of his writings, Freedom and the Arts: Essays on Music and Literature, offers more communications from his particular beyond, yet collectively these pieces are not just bracing but pleasurable, revealing a personal, even affable side of Rosen… The scholarship and sheer range of knowledge in these essays are predictably dazzling.”—Tim Pfaff, The Bay Area Reporter

“Its scope, which touches on literature as well as music, is not only broad but invariably arresting.”—Conrad Wilson, The Glasgow Herald

“Freedom and the Arts serves to enrich our appreciation, understanding, and passions of music, literature, and art… Freedom and the Arts embodies a corpus of creativity and achievement. Rosen leads readers through these pieces and eras and poignantly demonstrates the delicate features and everlasting joys we share when discussing and consuming art.”—Elisabeth Woronzoff, PopMatters

“This is an engaging, thoughtful, and humorous collection of essays on such a wide variety of subjects that the book is difficult to categorize… At a time when cross-disciplinary work is not only exciting but expected, Rosen’s writing takes the reader through musicological discourse into literature, philosophy, science, politics, and a host of other areas, all with the same agenda—to demonstrate that a work of art (any art, but in this case music) has intrinsic value regardless of the era or ethos in which it is received… An exciting volume for all.”—K.S. Todd, Choice

“An evident polymath, [Rosen] writes with equal grace and intelligence about the music of Mozart, the poetry of Mallarmé, and Adorno’s aesthetic framework. The overlap of critical observation and playfulness is evident throughout… Rosen has plenty to offer disciplined readers and students of the arts.”—Publishers Weekly